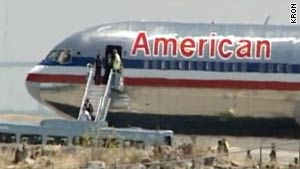 For more on this story, check reports from CNN affiliates KRON and KTVU.

(CNN) -- A security threat to an American Airlines plane in San Francisco Thursday was deemed "non-credible," according to the San Francisco Police Department and other law enforcement agencies.

No one was arrested or "placed in handcuffs" in connection with a phone call threatening a hijacking of the flight in San Francisco, California, police Sgt. Michael Rodriguez said.

Earlier, a source familiar with the investigation said that two passengers were being questioned further by authorities.

The threat was called in before the plane departed from San Francisco.

Randy Cohen, a passenger on the flight, said the people on the plane were calm in general, but that as the time went by on the tarmac, some became nervous.

Even when the pilot made an announcement, "you could tell the angst in his voice and the uncertainty," Cohen said.

Cohen said he saw authorities remove a large garbage bag from an overhead bin in the back of the plane.

Once police arrived, the passengers were removed from the plane, six at a time.

Another passenger said they waited on the isolated plane for three hours after being diverted from the runway.

Lt. Bill Scott of the Alameda County, California, Police Department said his department became aware of the threat when a clerk at a local business called to report it.

The clerk had received a call that included a threat from "a suspicious male," Scott said. The police then called the FBI.

Scott said he could not comment on the specifics of the threat and whether it included a threat to hijack the plane said, "It was significant enough for us to notify the FBI."

A security official told CNN that the caller claimed the flight would be hijacked, but nothing has been found yet to back up that assertion.

Federal air marshals were aboard, according to a source familiar with the incident. The source did not know whether the marshals had to break cover because of the incident.