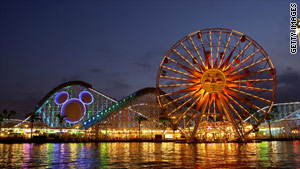 A man at Disney's California Adventure Park fell 25 to 30 feet after climbing over a barrier, officials said Thursday.
STORY HIGHLIGHTS

The man was in the building housing the queue for the Twilight Zone Tower of Terror, when he put his leg over the railing and fell, Martinez said.

"The guest was standing in line with friends on a second-floor platform when he climbed over a barrier to the area below and lost his balance and fell approximately 25 feet," Disneyland spokeswoman Suzi Brown said in a statement.

"The guest was transported by ambulance to the hospital. We understand his injuries were minor and he has been treated and released," Brown said.

The incident happened around 10:30 p.m., the Metro Cities dispatcher said. It caused Disney to shut down the ride briefly while paramedics attended to the fallen park-goer, Martinez said, adding that the ride reopened soon thereafter.

The Twilight Zone Tower of Terror is a ride that brings visitors to the top of an elevator shaft, then drops them. The Disneyland website says, "Join thrill-seekers at the mysterious Hollywood Tower Hotel for the ultimate adrenaline rush. For the longest 2 minutes of your life, rise and fall at terrifying speeds in the hotel's haunted elevator."

The California Adventure Park is adjacent to Disneyland in Anaheim.

CNN's Samuel Gardner and Rosalina Nieves contributed to this report