Florida bear rescued after getting head stuck in jar 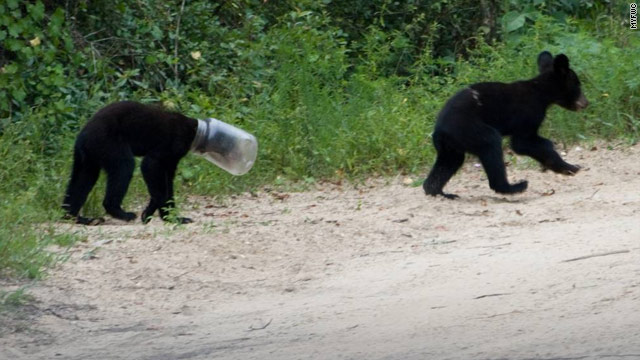 "Jarhead" eluded wildlife officials for 10 days before they were finally able to catch him.
STORY HIGHLIGHTS

(CNN) -- It may seem like a story ripped from the pages of "Winnie the Pooh," but a little black bear is alive after Florida biologists removed a plastic bottle stuck on its head for at least 10 days.

The bear, his mother and two siblings regularly raided trash bins in Weirsdale, a small community in the vast Ocala National Forest.

But the situation turned into a jam when the little one, affectionately nicknamed Jarhead, was seen in late July wandering with his head trapped in a clear plastic container, according to the Florida Fish and Wildlife Conservation Commission.

The 6-month-old cub couldn't eat or drink normally, and was days away from death when he was freed, biologists say.

It took 10 days for officials to track down the bear family using baited traps and following up frantic leads by concerned residents.

The wary mother avoided traps for over a week, and the hunters assumed Jarhead was dead.

But just as biologists were giving up, they caught a glimpse of the family and shot the protective female with a tranquilizer gun.

They scooped up the little cub, and after a brief tussle, they were able to grab the container off his head.

But the tough little bear lived up to his U.S. Marine moniker and did not give up without a fight, the biologist who uncorked the cub said in a statement.

After an overnight stay with his groggy mother, Jarhead and the whole family was moved to a less populated part of the forest for safety.