One dead after small plane crashes near airport in Phoenix, Arizona 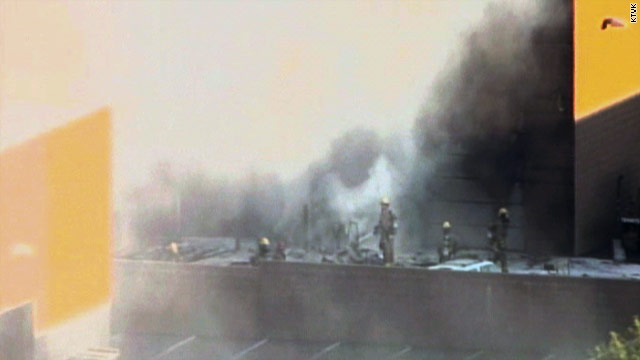 Video footage from the crash scene shows white smoke rising from what appears to be a two-story building.
STORY HIGHLIGHTS

For more about the crash, read reports from CNN affiliates KNXV and KTVK.

(CNN) -- One person died when a small plane crashed into a building and burst into flames Wednesday morning near the Deer Valley Airport runway in Phoenix, Arizona, authorities said.

Phoenix Fire Department Spokesman Scott Walker said the plane was quickly destroyed by the fire making it difficult for authorities to identify the occupant or occupants because the tail number was gone. The tail number is used to connect aircraft to a flight plan filed by the pilot.

Witnesses said the plane had just taken off and had looped around when the engine started sputtering and smoking, Walker said. Then the plane crashed into the building.

FAA spokesman Lynn Lunsford said air traffic controllers were communicating with the plane before the incident, and the plane was landing on runway 7L.

The registered agent for the plane is Magneto Investments, according to federal records.

Walker said the plane hit City Wide Pest Control, near the airport. The fire did not spread to the building.

Video from the scene shortly after the crash showed white smoke rising from what appeared to be a two-story building with a severely-charred wall.

Tammy Rose, a reporter for CNN affiliate KTVK, was in a helicopter nearby when the plane crashed. She said at the time, the skies were blue and clear, there were a couple of aircraft getting ready to take off and this one appeared to be landing.

"It was really weird," said Cindy Cross, who manages the Sonic Drive-In restaurant nearby. "I was sitting here at my desk and I looked up over the Circle K and just saw a big black plume of smoke."

Cross, who lives right by the airport, said it was the fifth aircraft to crash nearby in the past eight years and the third so far this year.

"Some go down over my house and rattle windows," she said, noting that it scares her. "They come right over where I live. Every time one goes over, I want to get on the ground and lay down."

Catherine Hennings, manager of a Dunkin' Donuts about an eighth of a mile away from the airport, said she saw a "big cloud of smoke," fire trucks and police officers.

She said the customers at the business weren't panicky but had questions about what was going on.