Oklahoma county must pay up in Ten Commandments case 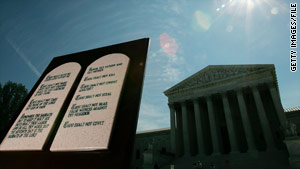 After a series of court decisions up to the U.S. Supreme Court, which refused to hear the case, the ACLU prevailed.
STORY HIGHLIGHTS

(CNN) -- The Haskell County, Oklahoma, Commission has 10 years to pay attorneys' fees of $199,000 after it was forced to remove an 8-foot-tall Ten Commandments monument.

The county has been in litigation with the American Civil Liberties Union of Oklahoma since 2006, after it allowed a resident to pay for and erect the granite monument on the courthouse lawn in Stigler.

After a series of court decisions up to the U.S. Supreme Court, which refused to hear the case, the ACLU prevailed. The monument was removed in March, and the attorneys' fees were settled last week, ACLU attorney Micheal Salem said.

Salem said the commandments were moved to private property owned by the American Legion about 150 feet from the courthouse.

ACLU Deputy Director Chuck Thornton said that when the commandments were erected on public property, it became an endorsement of religion.

"It's a very unwelcoming thing for those who do not subscribe to the Judeo (Christian) belief system. The government should not be in the business of showing favoritism or endorsing religion," he said. "The ACLU would never have been involved if it was somewhere other than public property. We don't want to squelch anyone's rights of free expression."

An attorney for the Alliance Defense League, which represented the county, did not return a call for comment.

Haskell County is a community of more than 12,000 residents southeast of Tulsa.