How the Gulf of Mexico became the nation's 'toilet bowl' 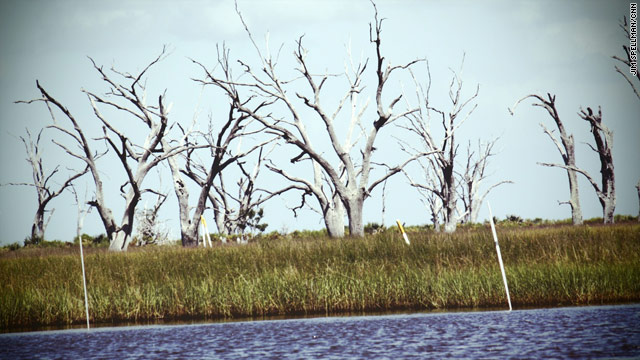 Pointe-Aux-Chenes, Louisiana (CNN) -- When Nazia Dardar looks at the seemingly endless lake of water behind her stilted bayou home, the 76-year-old sees what once was a farm.

Cows roamed there, she says, back when the lake was land.

"C'est le jour et la nuit," she says in French, the most common language down here on the farthest and swampiest reaches of the Mississippi River delta. "It's day and night."

Perhaps nowhere is the protracted death of the Gulf Coast more apparent than in Pointe-Aux-Chenes, Louisiana, and other indigenous bayou communities where, decades before the BP oil disaster, the marsh started disintegrating and environmental problems washed in from as far away as North Dakota and New York.

The Gulf of Mexico became, in effect, the United States' toilet bowl -- known for its seasonal "dead zones," high erosion rates, dirty industry, ingrained poverty and, now, for the biggest oil disaster in the history of the country. Compare that legacy on the Gulf Coast with the East Coast, with its wealth, and the West, with its more-sterling record of environmental stewardship.

Since the massive oil disaster began nearly 100 days ago, some American Indian communities on the coast here for centuries, including Pointe-Aux-Chenes, have begun grappling with the idea that they may need to retreat from the oil-sullied marshes.

But there may be hope for this "third coast" of the United States.

As the story of Dardar's community shows, this is a place where human roots run deep.

'That's going to be water'

Russell Dardar, Nazia Dardar's 43-year-old son, jabs a spade into a dead patch of marsh and pulls up a gob of reddish oil. It's the gooey consistency of a raw oyster.

Gallery: Bouncing back from catastrophe

"Next year, that's going to be water," he says, looking over the edge of a boat at the blackened fringe of an otherwise golf-course-green patch of bayou grasses. "All that there's going to be water. Without our wetlands, we have nothing."

He isn't being alarmist. These wetlands, a 20-minute boat ride from the stilted homes of Pointe-Aux-Chenes, provide nearly all the needs of people here.

Shrimp, crab, fish and oysters spawn and hide in the protective grasses. Those creatures are the basis for the local economy. They're also what everyone eats.

Russell Dardar, who can't trap crabs because of the oil disaster, makes regular trips to the marsh to take samples of the oil.

He records GPS locations and catalogs his findings in a spiral notebook. He says he doesn't want anyone to be able to say oil never affected this area.

Each patch of grass matters, he says, because so much marsh already has been lost.

Since 1932, more than 1,875 square miles of Louisiana have shriveled and died, according to the U.S. Army Corps of Engineers. That's enough land to nearly cover Delaware.

A chunk of wetlands the size of Manhattan floats away from the coast each year -- about a football field of land, on average, every 45 minutes.

In Pointe-Aux-Chenes, evidence of this trend is all around. You can see it in Nazia Dardar's backyard, where the land has turned to water. What once was a large farm now is just a garden. It's out on the bayou, where centuries-old cemeteries -- one of which is marked with a large white cross -- are sinking into the sea.

It's painful, but no one would want to be buried here these days, Russell Dardar says.

The dying marsh is, in large part, the result of human engineering.

Left alone, the Mississippi River flooded every few years. That was good for the environment but proved problematic for people living in the delta.

In Pointe-Aux-Chenes, the Dardars' ancestors built mounds of dirt, where they would wait out the floods of the mighty river.

In the 1700s, however, European trappers hatched other plans. To prop up ever-larger settlements near the strategic mouth of the Mississippi, they pushed the Indians south, toward the marshes, and began developing small berms and levees to control the river.

Then, in 1927, a deadly flood hit the river valley. In response, people took to bouts of extreme engineering, creating a "straitjacket" of levees to control the Mississippi, said Denise Reed, a professor of Earth and environmental sciences at the University of New Orleans.

"Never in the history of humankind, stretching back to the ancient delta civilizations of Egypt and Asia, had a river this big been controlled to this degree," writes Mike Tidwell in his 2003 book, "Bayou Farewell."

But there were unintended consequences.

If left untamed, the river deposits new sediment -- "little bits of Iowa and little bits of Illinois," as Reed puts it -- all over the delta region. This counteracts other natural processes in the wetlands, which cause some land to sink and erode.

As it is now, the levee-strangled river is designed not to flood. It doesn't deposit enough sediment in the marsh. Each year, it carries 120 million tons of dirt directly into the deep waters of the Gulf of Mexico, Reed said. The soil falls to the muddy ocean floor.

It zips right past the marshes, past Pointe-Aux-Chenes, where it's needed.

This unnatural system can't replenish itself. Without new soil, the marsh sinks and floats out to sea. And bayou communities watch their land become open water.

The environmental assault on the Gulf didn't stop with settlers and their levees.

Next came the oil industry, which first slurped oil out of the bottom of the marshes, dredging channels for ships and oil pipelines along the way.

Initially, the people of Pointe-Aux-Chenes met the oil companies with shotguns raised.

"We said, 'If you go one more step, you'll risk your life,' " one local, Sydney Verdin, told The Associated Press, recalling an encounter from about 40 years ago.

The tribe was successful in fending off that early oil pipeline project, which would have cut through an ancient burial ground as well as an important marsh.

But the petroleum industry, feeding on a nation's seemingly unquenchable thirst for oil, continued to dig scars into the local environment.

There are about 10,000 miles of oil canals in the Louisiana Gulf Coast -- several of which dart straight across the finger-like bayous of Pointe-Aux-Chenes. These canals, plus the underground pipelines that carry oil from the seafloor to refineries, can have a devastating effect on the environment, according to scientists.

Not only do they clear marsh, but these arrow-straight channels become pathways for saltwater to be sucked up into freshwater marshes, like soda through a straw.

Plants can't handle the rapid change, and they suffocate.

This is especially apparent in Pointe-Aux-Chenes, which means "Oak Point" in French, the language of the people who colonized Louisiana and then sold it to the United States.

As Russell Dardar steers his boat out of the marshes near town, he points to the skeletons of dozens of oak trees suffocated by saltwater intrusion.

Once the pride of the town, these dead trees look like the massive antlers of submerged elk -- jutting up from the green marsh at sickly angles.

The BP oil disaster has left Pointe-Aux-Chenes, and other American Indian groups along the coast, in a gut-wrenching limbo.

They're not sure when they'll be able to fish again -- or if they ever will.

Some talk about leaving.

The oil disaster "poses a death threat to our people," said Brenda Dardar-Robichaux, principal chief of the United Houma Nation, which is among the tribes represented in Pointe-Aux-Chenes. "That is not an exaggeration."

Nazia, the matriarch of the Dardar family in town, says she never will leave her home. There's too much history here. She was born just across the bayou, in a place she can see from her front porch. Her great-grandfather is buried out on the marsh.

But younger generations are less sure about the prospects for survival. If a hurricane hits, they worry, oil could cover their centuries-old settlement, making it impossible to return. Their town is more vulnerable to such storms now, they say, because the wetlands, which act as a natural buffer to storms, have largely disappeared into the ocean.

Each member of the family is working through the disaster in his or her own way.

Donald Dardar, another of Nazia Dardar's sons (she has 15 children in all), has gone to work temporarily for BP in hopes that he can protect the marsh from more oil damage. He had to swallow his pride to do so.

"They took my way of life away from me," the 54-year-old said, recalling the nights before the first day of shrimping season when he couldn't sleep, anticipating the day's catch. "But it don't pay to get mad."

Russell Dardar takes oil samples from the marsh so he can prove that what's happening here is real, he says. He can't imagine moving away from Pointe-Aux-Chenes, where he knows everyone, and where half the town seems to be family.

The Dardar family is looking for light in this dark situation.

Theresa holds out hope that, if the tribes survive the oil disaster, the country will realize that the wetlands here need to be restored. But she says that's unlikely, given the history.

The state of Louisiana has made several piecemeal attempts -- including some river diversion projects -- to release the Mississippi River from the levees and dams that strangle it and prevent it from creating new wetlands. None appear to have slowed the death of the coast, and some have been accused of creating new environmental problems.

Reed, of the University of New Orleans, said it would cost billions of dollars to re-engineer the river so that it could create healthy wetlands again.

But, if ever there was a time to make such an investment, it would be now, she said.

In an Oval Office address on June 15, President Obama alluded to this point, too.

"Beyond compensating the people of the Gulf in the short term, it's also clear we need a long-term plan to restore the unique beauty and bounty of this region," he said.

The Dardar family has been waiting generations for that to happen.

They don't plan to give up any time soon.