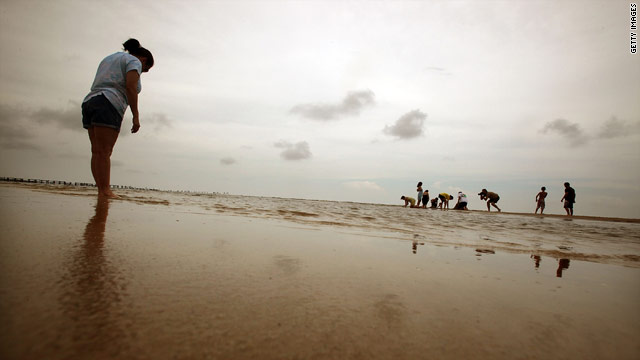 A family plays on a reopened beach July 16 in Waveland, Mississippi.
STORY HIGHLIGHTS

(CNN) -- Here are answers to some basic questions about the massive oil leak in the Gulf of Mexico.

What is this "static kill" they're talking about now?

No decision has been made to proceed with the latest idea for plugging BP's ruptured well, a procedure called "static kill."

This method, still being devised, would involve pumping heavy drilling mud down through the well cap and into the well bore. This is similar to the "top kill" method that failed earlier (see below), except that now the oil isn't flowing -- hence the word "static."

Engineers are proceeding with the relief wells that eventually will pump concrete into the well bore to kill it from the bottom. A static kill, if pursued, would hit it from the top.

What is the seepage that was detected near the well?

Thad Allen, the federal government's oil spill response director, on July 18 said testing revealed a "seep a distance from the well." He did not provide further details about what is leaking, where the leak is located or how big it is.

Allen said a federal science team and BP representatives have discussed the "possible observation of methane over the well."

Allen on July 19 said testing on the integrity of the capped well will continue only if BP continues to "rigorously monitor for any signs that this test could worsen the overall situation."

Allen ordered BP to notify the government if other leaks were found.

Some seepage from the ocean floor is normal in the Gulf, according to University of Houston professor Don Van Nieuwenhuise.

"A lot of oil that's formed naturally, by the Earth, ends up escaping or leaking to the surface in the form of natural seeps, and yes, there are a lot of these all around the world," he said.

The well has been capped. Is the disaster over?

Not by a long shot.

The cap that is keeping the oil from spewing into the water is only part of a test to see if the well can withstand the pressure of being shut off. If engineers detect signs that the oil could burst through in other parts of the well structure, the cap's valves will be opened to prevent another blowout.

The new cap has hookups that will allow some oil to be channeled to ships on the surface rather than spill into the water, but nothing is guaranteed.

The ultimate solution is to kill the well below the ocean floor. That's the mission of two relief wells that have been making steady progress for weeks now. (See an explanation of relief wells below.)

"We won't be done until we actually know that we killed the well and have a permanent solution in place," President Obama said Friday morning from the White House Rose Garden.

Even if no more oil leaks from the well, tens of millions of gallons of oil remain in the water, and the cleanup in the Gulf and along the shoreline will go on for months and maybe years.

How did this all start?

"There is no doubt at all here that what has happened is the blowout prevention mechanism at the bottom of the well ... is defective," Interior Secretary Ken Salazar said May 2 on CNN's "State of the Union."

Why is it taking so long to shut off the flow of oil? What methods have been tried to stop the oil flow at its source?

Working on a damaged well at a depth of 5,000 feet - far deeper than any manned submarine can go - presents a tremendous engineering challenge.

Numerous attempts to stop the leak have failed or not yielded the desired results:

3. Install four-story containment dome. Outcome: Failed because of formation of hydrates, similar to ice crystals, that made the dome buoyant

How much oil has spilled out? How does this compare with other big spills?

BP and the Coast Guard initially estimated 1,000 barrels of oil a day were leaking from the well, but that estimate proved wildly inaccurate. Scientists now estimate that 35,000 to 60,000 barrels (1.4 million to 2.5 million gallons) of oil have spewed daily from the breach.

The high end of that range would mean that about 215 million gallons have leaked out since the disaster started.

How far has the oil spread? Might it escape the Gulf of Mexico?

Oil, in forms ranging from a light surface sheen to tar balls to thick red-brown sludge, has washed ashore along the Gulf Coast from marshes in western Louisiana and Mississippi to beaches in Alabama and the Florida Panhandle. Tar balls were found July 7 in Lake Pontchartrain, north of New Orleans, Louisiana.

There was concern during May and early June that the Gulf's loop current could carry oil to the Florida Keys, the Caribbean Sea and the Atlantic Ocean, but those fears appear to have abated.

What methods are being used to keep oil away from the shore?

More than 3.15 million feet (almost 600 miles) of boom has been placed in the water to serve as a physical barrier.

In Louisiana, temporary sand berms are being built to protect barrier islands.

Skimmers aboard boats and ships are trying to capture floating oil.

Absorbent booms and pads are being used to soak up oil floating on the surface or clinging to plants, boats and structures.

Commercial fishing and shrimp boats are being used in many of these operations, providing a source of income for some idled workers.

About 1 million gallons of chemical dispersants have been sprayed on surface oil in hopes of speeding its breakdown and evaporation.

Pools of floating oil are set on fire in controlled burns.

The massive converted cargo ship A Whale was tested for its ability to separate oil from seawater. Although its operators say it can skim 21 million gallons of water a day, it was rejected because the huge vessel cannot navigate close to shore.

The Obama administration maintains that the public will not bear the cost of the cleanup or recovery.

The federal government sent a bill this week for $99.7 million to BP and other responsible parties. BP and other parties have already paid three bills totaling $122.3 million.

In addition, BP has placed $20 billion into an escrow fund to pay damage claims.

What is the effect on beaches, marshes and wildlife?

Images of oil-soaked pelicans have been seen regularly, and rescue operations for endangered sea turtles and manatees are ramping up. As of Wednesday, July 14, the unified command for the BP oil spill reported these wildlife impact figures:

Facts about the Gulf of Mexico

The number of fish, shrimp, oysters and other sea creatures killed or harmed is unknown.

What is the effect on the region's economy?

Commercial fishing in the Gulf of Mexico earned $659 million in total landings revenue in 2008, according to the National Marine Fisheries Service. The region accounts for 73 percent of the nation's shrimp harvest and 59 percent of its oysters.

Deepwater drilling in the Gulf employs more than 10,000 workers directly and 25,000 indirectly in support businesses, CNNMoney.com reports. The overall oil industry employs 55,000 people in the region, according to government statistics.

Countless stores, gas stations, restaurants, hairdressers and other enterprises rely on money from those industries flowing their way.

The government has suspended deepwater drilling and closed 35 percent of the Gulf to commercial fishing. Oysterman Vlaho Mjehovich found "95 percent casualties" in his oyster beds this week. "Everything's dying," he said. "There's no oysters out here. ... It's dying now; it's going to keep dying. I've seen areas [go] 10 years ... without oysters coming back.

"This is not something that's going to be done and fixed overnight. People have to understand: This is going to take years to come back. And it's like, what do you do? I had a business. My business was taken away from me overnight."

Gulf seafood that makes it to stores and restaurants is safe, the Food and Drug Administration and Vice President Joe Biden have said.

How many similar wells are there? What is the risk that the same thing could happen to them?

CNNMoney.com reports that as of the end of last year, 35 vessels were producing at more than 1,000 feet deep in the Gulf, and at least 18 deepwater prospects could be developed over the next few years, according to Douglas Westwood, an international research firm.

BP, with eight producing deepwater rigs, three of them even deeper than the 5,000-foot Deepwater Horizon, is the biggest deepwater operator in the Gulf.

What is a relief well, how does it work, and when will it be completed?

Drilling of two relief wells began within days of the Deepwater Horizon accident; officials have said the wells should be completed by mid-August, but some have expressed optimism the job could be done sooner.

The relief well later could be used to resume production.

Is there a moratorium on deepwater drilling?

The federal government announced Monday it is issuing a new moratorium on deepwater drilling in the Gulf of Mexico effective until as late as November 30. A federal judge threw out a previous six-month ban.

Last week, a federal appeals panel rejected the government's request to overturn the judge's decision. Obama administration officials have repeatedly indicated their intention to reinstate the moratorium since the initial ruling.

Many coastal residents object to the moratorium, saying thousands of people and businesses depend on income from deepwater drilling operations.

How dependent is the United States on oil from the Gulf?

According to the Minerals Management Service, offshore operations in the Gulf produce one-eighth of U.S. domestic oil and a quarter of its natural gas.

CNN's Derrick Ho, the CNN Wire staff and CNNMoney.com contributed to this report.