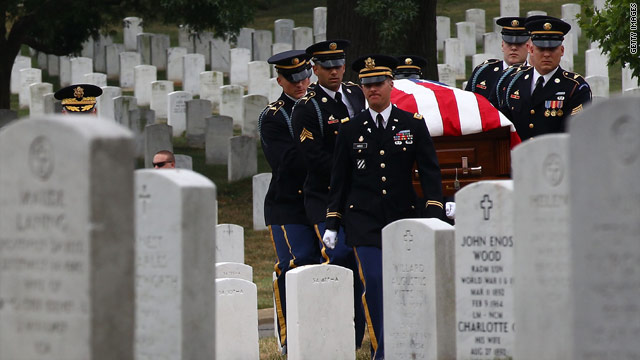 (CNN) -- The remains of a U.S. soldier missing for nearly 92 years were laid to rest Monday at Arlington National Cemetery, with military honors for an Army private who died in a World War I skirmish in France.

Pvt. Thomas Costello was buried with honors including a casket team, a firing party that fired three volleys and a bugler who sounded taps. His grave is not far from the grave of World War I Gen. John J. "Black Jack" Pershing. Soldiers from the Army's 3rd U.S. Infantry Regiment, The Old Guard, conducted the ceremony.

Fifteen people attended the graveside ceremony, including three relatives -- one of those was Michael Frisbie.

"It was overwhelming," Frisbie's wife, Leanne, told CNN. "They were just looking through the family tree to make sure that they had the right family and, bingo, they found us."

Frisbie, 43, says he had no clue Army Pvt. Thomas D. Costello even existed. Frisbie's parents divorced when he was only 6 months old and he never got to know his paternal relatives.

"I can't believe they went to all this extent to find me, which is good though, because I want to honor the soldier," said Frisbie, who lives in Stockton Springs, Maine.

At the conclusion of the ceremony, the flag that had covered the coffin was given to Frisbie. Military dignitaries including a brigadier general and the Army's deputy chief of chaplains participated in the service.

Costello, who was from New York City, enlisted in the Army on September 19, 1917, and was part of the 60th Infantry Regiment, 1st Brigade, 5th Infantry Division, according to military documents.

A Defense Department search team, operating near the location, was notified of the discovery and recovered human remains upon excavating the site -- some 20 miles away from the coordinates Costello's commander gave when the war ended.

"They found some rosary beads, which we now have," he said, adding that since Costello's family was known to be Catholic, it was the one item that likely belonged to the fallen soldier.

Together with its operational units, some 600 personnel -- including forensic anthropologists, DNA scientists, archaeologists and explosive ordnance specialists -- work to locate, recover and identify remains and return them to family members. Many of the personnel come from military backgrounds, according to Larry Greer, the office's public affairs director.

"You can think of [each case] as a big-city police detective case; however, our cases are at a minimum 40 years old. And some of them are 60, 70 years old," said Greer.

World War I finds are rare, though, and the DPMO has only identified five U.S. soldiers from the "great war" since 2006, Greer said. That still leaves more than 3,000 U.S. troops missing and unaccounted for in that war. It's a small proportion of some 80,000 still missing from other wars that have ended -- World War II, the Korean War, the Cold War, and the Vietnam War. All the service members listed as prisoner-of-war/missing-in-action in the 1991 Gulf War have been accounted for, according to the agency.

"If a family member were to write us and say, 'Please, my loved one is missing, please go find him,' we would respond to that family member and say, 'Well, let us show you what we've already done on his case.' And oftentimes, they're quite surprised to learn of it."

Some $105 million is allocated annually to recovering missing soldiers from past wars -- an amount, Greer said, that reflects the military's commitment to "leave no man behind."