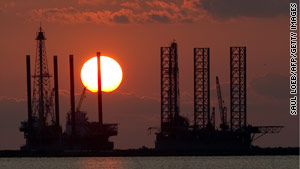 A federal appeals panel upheld a district judge's order to block the ban on deepwater drilling in the Gulf of Mexico.
STORY HIGHLIGHTS

New Orleans, Louisiana (CNN) -- A federal appeals panel on Thursday upheld a district judge's order to block the Obama administration's six-month ban on deepwater drilling in the Gulf of Mexico.

In a brief ruling just a few hours after the hearing, the three-judge appellate panel denied the government's request to reinstate the moratorium while the full appeal of the case continues.

The government declared the moratorium in response to the April 20 explosion and fire on a deepwater rig that led to the Gulf oil disaster, with millions of gallons gushing into the ocean and oil giant BP unable to stop it.

Last month, U.S. District Judge Martin Feldman issued a preliminary injunction against the ban, which halted all drilling in more than 500 feet of water and prevented new permits from being issued. The government appealed the ruling and asked for an emergency stay of Feldman's decision while the case continued.

On Thursday, the appellate panel of the 5th Circuit U.S. Court of Appeals rejected the government's request, saying it had "failed to demonstrate a likelihood of irreparable injury if the stay is not granted."

Video: Is the seafood safe to eat?

The ruling also said there was no evidence that deepwater drilling would resume immediately as the case goes on.

In the ruling, the appellate judges said the government can apply for an emergency halt to any drilling that it can show "has commenced or is about to commence."

The panel ordered the appeal of the case to be expedited, with arguments on the full appeal of the lower court ruling blocking the moratorium to take place during the week of August 30.

One of the three appellate judges filed a partial dissent that called for reinstating the moratorium, but agreed with giving the government the right to apply for an emergency halt to any drilling, as well as expediting the hearing for the full appeal.

The Interior Department said Thursday night that a new moratorium will be issued by Secretary Ken Salazar, but didn't say when.

"We continue to believe that it is not appropriate to drill new deepwater wells in the Gulf until we can be assured that future drilling activity can be conducted in a safe and environmentally responsible manner," spokeswoman Kendra Barkoff said in a statement.

"Based on what we have learned since the BP oil spill it has become increasingly clear that companies may not have adequate containment and response capabilities to respond to a spill and therefore as the Secretary has said previously, he will be issuing a new moratorium."

Louisiana Gov. Bobby Jindal, in a statement Thursday, said he was pleased at the court ruling but added "this matter is not resolved and there remains uncertainty about the future of deepwater drilling and thousands of jobs in our state."

Jindal said "serious job losses" would result from a six-month moratorium, costing at least $65 million in lost wages in Louisiana.

Last month, Salazar called a six-month halt on deepwater drilling "needed, appropriate and within our authorities" as the government assessed the safety of such operations in the aftermath of the Gulf oil catastrophe.

"We see clear evidence every day, as oil spills from BP's well, of the need for a pause on deepwater drilling," Salazar said in a statement on June 22.

Feldman agreed, writing in his ruling, "an invalid agency decision to suspend drilling of wells in depths of over 500 feet simply cannot justify the immeasurable effect on the plaintiffs, the local economy, the Gulf region, and the critical present-day aspect of the availability of domestic energy in this country."

In issuing the ruling, Feldman said that "the court is unable to divine or fathom a relationship between the findings (of the government) and the immense scope of the moratorium. The plaintiffs assert that they have suffered and will continue to suffer irreparable harm as a result of the moratorium. The court agrees."

In response to Feldman's ruling, White House spokesman Robert Gibbs said Obama "strongly believes, as the Department of Interior and Department of Justice argued ... that continuing to drill at these depths without knowing what happened does not make any sense."