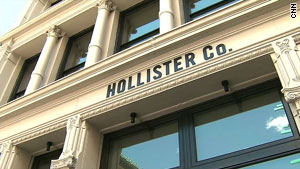 New York (CNN) -- A bedbug outbreak at two trendy New York retail shops has sounded the alarm among city residents and businesses, prompting calls for the city to examine how it deals with the prickly pests.

Hollister, a popular clothing store owned by Abercrombie & Fitch in the fashionable Soho neighborhood, remained closed Friday after a bedbug infestation was found earlier in the week, according to company spokeswoman Iska Hain. And an Abercrombie & Fitch store in South Street Seaport also has been closed by an infestation.

Abercrombie and Fitch said Friday afternoon the problem in the SoHo Hollister store had been taken care of and the shop will reopen Saturday morning.

"The company has requested guidance from the mayor's office on how businesses in Manhattan should deal with this issue," the company said in a news release. "In the meantime, the company's first priority continues to be its customers and associates."

The incidents mirror a sharp overall spike in bedbugs in recent years, yet efforts to combat the problem have mostly focused on residential buildings, leaving the issue of contamination in commercial spaces largely ignored.

The problem, according to Eisenberg, is that bedbugs carry a stigma, which causes many cases to go unreported. "It's like a don't ask, don't tell policy," he said. "People don't tell their employers that they have bedbugs in their house" -- bedbugs that can hitch a ride to the workplace.

According to the New York City Department of Housing Preservation and Development, it issued 4,811 violation notices to residential landlords for bedbug infestations in 2009, compared with 82 in the 2003-2004 fiscal year. For the first half of 2010, 1,976 bedbug violation notices have already been written.

However, such statistics represent only a fraction of bedbug cases in the city, as they come almost exclusively from buildings in the rental market. Owners of bedbug-infested residences are less likely to call 311, the city's non-emergency hotline, which then notifies the Housing Preservation Department.

Further, landlords of commercial structures are currently not obligated to report bedbug infestation.

State Assembly member Linda B. Rosenthal, who recently sponsored legislation to require landlords of apartment buildings to disclose information about an apartment's bedbug history to potential tenants, plans to address the matter of bedbugs in businesses, though she admits doing so will be tricky.

"People buy a shirt, leave it hanging in their apartment, a bug gets on it, and then they go to work." Rosenthal told CNN. "If you buy a piece of clothing you should assume it's bug free, but it's hard on the retailer to assure that it is, because how would they know."

Treating bedbugs can be extremely expensive, and no insurance policies cover them. "It would be cost prohibitive on both sides," Rosenthal said.

The rise in bedbug cases is not exclusive to New York. Last year, the federal Environmental Protection Agency sponsored a bedbug conference in Arlington, Virginia. Speaking to a crowd of 230 academics, agency employees and exterminators, Dale Kemery, an agency spokesman, said the incidence of infestation in the United States has tripled since 2005.