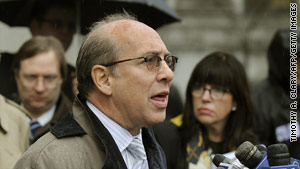 New York (CNN) -- A U.S. district judge in New York approved a settlement Wednesday that could pay more than $700 million to thousands of 9/11 first responders exposed to toxic dust at ground zero.

Before approving the settlement Judge Alvin Hellerstein listened to testimony from a sampling of some of the 10,000 plaintiffs at Wednesday's hearing about the health battles that have plagued them since working at the World Trade Center site.

"I intend to approve this settlement, and I now do so as a fair, adequate and reasonable settlement reflecting hard work and a concern for fairness by all parties," said Hellerstein.

"It is fair in amount and fair in procedures," he added.

Qualifying plaintiffs will be enrolled in a special insurance policy through MetLife that will pay up to $100,000 for certain blood and respiratory cancers diagnosed during the coverage period.

The amended settlement raises the total compensation for sick first responders from $625 million proposed in the March 11 settlement to $712 million and caps attorney fees to 25 percent of the total settlement.

Additionally, people claiming severe respiratory issues contracted within seven months of exposure at the World Trade Center site or any surrounding areas could receive between $800,000 to $1.05 million. Plaintiffs not suffering from a qualifying injury, but have a legal claim fearing they will become sick can receive $3,250. Claims of death proven to be caused by post 9/11 operations could receive $1.5 million in compensation.

"This settlement provides plaintiffs with closure and certainty, while also reserving some funds for future claims," said Christine LaSala, president and CEO of the WTC Captive organization.

"We believe it is the best path forward for these plaintiffs, as their only other option right now is to proceed to lengthy and costly litigation with an uncertain outcome," LaSala explained.

Ninety-five percent of the plaintiffs have to agree to opt in for the settlement to be finalized. They will have until September 8 to review the settlement and decide if they will participate.

Attorney Marc Bern, who helps represent victims, is confident the settlement will get 95 percent approval.

"Once I have an opportunity to send out letters letting everyone know how much they're getting precisely, I think that we're going to get very close to 100 percent," Bern said.

According to Bern, after the settlement is finalized the first payouts will be made in November.