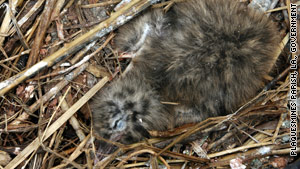 The nesting grounds of brown pelicans and other birds have been affected, the Plaquemines Parish president says.
STORY HIGHLIGHTS
RELATED TOPICS

Venice, Louisiana (CNN) -- Crews cleaning up the oil in one Louisiana parish have trampled the nests and eggs of birds including the brown pelican, which came off the endangered species list last year, the head of the parish said Wednesday.

Plaquemines Parish President Billy Nungesser said the parish doesn't want to turn away contractors, but he called for more care when crews work in the sensitive wetlands.

Plastic bags containing snare boom were "recklessly placed" around the island without consideration for wildlife. In one picture released by the parish, a plastic bag was on top of a nest containing broken speckled eggs.

Dozens of people, including experienced veterinarians, have been going to the area from all over the country to help with the affected wildlife, the parish said.

Nungesser met with the Humane Society of the United States and asked it to work with contractors who are cleaning the birds to come up with a better way to enlist the help of volunteers, the parish said.

"We want to improve our comfort level of knowing someone is out there looking for these birds and other animals -- doing all they can to save them," Nungesser said on the parish website.

"The people BP sent out to clean up oil trampled the nesting grounds of brown pelicans and other birds," he said. "Pelicans just came off the endangered species list in November of last year. They already have the oil affecting their population during their reproduction time, now we have the so-called clean up crews stomping eggs.

"The lack of urgency and general disregard for Louisiana's wetlands and wildlife is enough to make you sick," he said.