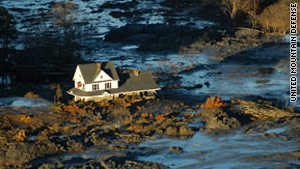 Three homes, including this one, were swept off their foundations in the coal ash spill.
STORY HIGHLIGHTS
RELATED TOPICS

The state Department of Environment and Conservation imposed the penalties after determining that the billion-gallon spill violated state clean-water and solid waste disposal laws.

In a statement announcing the fines, Environment Commissioner Jim Fyke called them an "appropriate" response "to an unprecedented event."

TVA spokesman David Boruff said that the fine was expected and that the utility would not challenge it.

The December 22, 2008, spill began when a dike collapsed at a retention pond at the TVA power plant in Kingston, about 35 miles west of Knoxville. The mixture of water and ash was enough to fill nearly 800 Olympic-sized swimming pools, spreading across more than 300 acres of land and fouling the adjacent Emory River.

There were no deaths, but three homes were destroyed and about a dozen others damaged.

The spill contained some toxic chemicals, such as arsenic, selenium, lead and radioactive materials like chromium and barium. But the TVA and the federal Environmental Protection Agency have reported that air and drinking water in the area were safe and that the levels of toxic substances in the spill did not exceed federal standards.

About 60 percent of the 1.1 billion-gallon spill has been removed from the river in the first phase of cleanup, Boruff said. The entire operation may take another three to four years, he said.

The TVA agreed to pay $40 million for economic development projects in Kingston in 2009 as part of a larger fund set up for cleanup efforts.