Rig's crew may have been 'shorthanded and fatigued,' lawmaker says 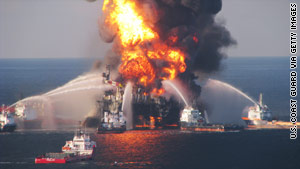 Fire boats battle a blaze at the Deepwater Horizon rig on April 21 in the Gulf of Mexico before it sank.
STORY HIGHLIGHTS
RELATED TOPICS

(CNN) -- The crew of the drill rig Deepwater Horizon may have been overworked and short of key personnel before the explosion that unleashed the worst oil spill in U.S. history, a leading Democratic congressman suggested Tuesday.

Payroll records show that 20 crewmen -- including seven of the 11 who died on the rig -- had worked a 24-hour shift six days before the explosion, Rep. Nick Rahall wrote in a letter to Steven Newman, CEO of rig owner Transocean Ltd. Rig workers typically work 12-hour days.

And records showed only 18 people at work on the second shift on April 20, the night of the explosion, "with zero engineers, electricians, mechanics or subsea supervisors listed in the report," he added.

"Although these reports do not provide a complete picture of who exactly was working during the time of the explosion and in the days leading up to it, when combined with the ongoing BP internal investigation that suggests that inattentiveness may have been a contributing factor in the disaster, I have serious questions about whether enough people were working on the night of April 20 to adequately handle the complex operations that were being performed, or if crew fatigue caused by extended shifts may have played a role," wrote Rahall, D-West Virginia, the chairman of the House Natural Resources Committee.

Rahall called on the company to give his committee more detailed logs and a further explanation of its staffing -- a request Transocean said it would meet.

But Transocean said no worker put in a 24-hour day, and the documents Rahall cited didn't tell the whole picture. Daily drilling reports track operations and "certain personnel," it said, "but does not use them to catalog complete crew shifts or the actual hours worked by each crewmember."

"At the time of the accident, the Deepwater Horizon and its crew had compiled seven consecutive years of operations without a single lost-time safety incident," the company said in a written statement. "The vessel was properly and professionally manned; there was no shortage of technical expertise, nor did any crewmember work a 24-hour shift."

CNN was given access to individual time sheets that appear to back up Transocean's claim that no employees worked 24-hour shifts on April 14 -- six days before the explosion that eventually sank the rig.

And other documents reviewed by CNN seem to indicate that additional salaried workers may have been on the job that don't show up on time sheets, possibly refuting the committee's claim the rig was shortstaffed on April 20.

Transocean, well owner BP and oilfield services contractor Halliburton have blamed each other for the disaster that followed the explosion. The undersea well the rig was drilling has been gushing up to 19,000 barrels (798,000 gallons) of crude a day into the Gulf of Mexico since late April.

Rahall's committee is one of several in both houses of Congress to hold hearings into the spill, which now dwarfs 1989's Exxon Valdez disaster. In addition, a presidential commission and a Coast Guard-Interior Department board in Louisiana are investigating.

BP reported problems controlling the well and won a delay in testing a critical piece of equipment in March, according to documents released in late May. Stephen Stone, a laborer on the doomed rig, told the House Judiciary Committee that drilling had to stop four times in three weeks because of the loss of drilling fluid, "either because the underground formation was unstable or because drilling too quickly caused the formation to crack."

The well was five weeks behind schedule, and some of the survivors have told CNN that BP cut corners and pushed ahead with the well despite safety concerns.

In addition, Doug Brown, the rig's chief mechanic, told the Judiciary Committee that BP and Transocean managers argued over drill plans the day of the explosion and that cuts to Deepwater Horizon's engineering staff left the crew with a backlog of preventive maintenance to perform.