Hoh Indian Reservation, Washington (CNN) -- For the Hoh, life centers on the silver waters just off their reservation.

Throughout the tiny Native American tribe's history they have lived and fished on the westernmost point of Washington state where the river that shares their name meets the Pacific Ocean.

According to the tribe's legends, the Hoh were created on the river by K'wati or the "Changer" in what the tribe refers to as the "Time of the Beginnings."

In Hoh lore the tribe were "upside down people," who walked on their hands and struggled to throw fishing nets with their feet. K'wati, the legend goes, righted them and taught the tribe to live from fishing the river and ocean.

For tribe member and treasurer Amy Benally, the danger can be seen on the doorstep of her family's home that has stood at the mouth of the river for nearly a century.

Benally grew up there with 12 members of her family. Now the home is a gutted wreck from repeated flooding.

At first the waters took out the garage and the small building Benally's grandfather used to smoke fish. Then the family had to flee upstairs. "We'd see the waves and the logs coming," Benally said standing in the musty ruin of the home. "We'd stand out here on the porch, and my grandfather would get mad at us and tell us to come back into the house. It was pretty scary."

Although the lowlands where her family lived were always prone to flooding, Benally said the water rises more often now. "It never used to be this bad," she said. "The river's changed." 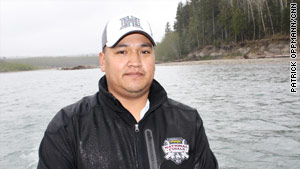 Ernest Penn, the tribe's fish and wildlife officer, moved his family away from the reservation because of the flooding.

Ernest Penn, the tribe's fish and wildlife officer, is a constant presence on the river and sees the difference too.

Cruising up the river in his boat, Penn showed where heavy rains caused a landslide, where erosion changed the river's bank and where, pointing to a stretch of water, a "big pasture used to be."

The flooding is no small problem for a tribe of just under 300 people who occupy a reservation only one square mile in size.

Several homes have been abandoned, other homes and the tribe's community center wear permanent necklaces of sandbags to keep away floodwaters.

There is little room for new buildings and even where there is it's unlikely they could be put up -- more than 90 percent of the reservation is in the flood plain, according to tribal leadership.

There are no clear culprits for the tribe's woes. According to Spencer Reeder, the Washington Department of Ecology's lead strategist for climate change policy, the increased flooding could be due to a combination of factors including global warming, logging upriver and cyclical weather patterns that have brought heavy rains.

According to a department study, the coast where the Hoh live could see an additional rise from climate change in sea levels of as much as 3 feet over the next century.

Already, when the reservation floods, the water comes up with terrifying speed. Baseball games have been interrupted, said Penn. "We'll be waist deep on the ball field."

Last year, Penn decided to move away from the reservation. "I got two little kids, what if the river came up around them?"

To rescue the tribe's future the Hoh leadership decided to move most of the reservation to higher ground and purchased new land for the expansion. Before they begin building homes though, the Hoh are waiting for Congress to pass a bill that places 37 acres of national park land in a trust for the tribe.

The tribe would not be able to develop that land, but the grant would mean that tribe members will continue to live on one piece of land and help the Hoh obtain funding for new housing.

According to a spokesman for Rep. Norm Dicks, the Washington state Democrat who sponsored the bill, Congress is expected to vote on the measure by the end of the year.

For Tribal Chairperson Maria Lopez, the move away from the water won't come soon enough.

"We are ready to move, we are ready grow," Lopez said looking out at the coastline where a major fault line sits.

Tribal lore talks of an earthquake and giant wave that devastated the Pacific Northwest coastline 400 years ago. "What would happen," Lopez asked, "if a tsunami comes while we are here?"