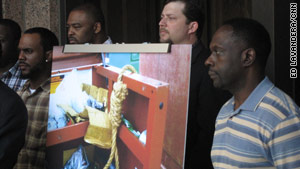 Dallas, Texas (CNN) -- African-American workers at a Texas pipe factory endured a string of racial slurs and harassment and were targeted by their managers when they complained, federal investigators have determined.

Black employees at the Turner Industries plant in Paris, Texas, regularly "were subjected to unwelcome racial slurs, comments and intimidation, racial graffiti, nooses in the workplace and other symbols of discrimination," the Equal Employment Opportunity Commission reported.

Black workers also were denied promotions and disciplined more harshly than whites, the agency concluded in a three-page letter in late March. Managers at the plant not only were aware of a "hostile environment," they also targeted workers who complained and disciplined white employees who opposed the harassment, the EEOC found.

The EEOC has called on Turner Industries, based in Baton Rouge, Louisiana, to join talks aimed at producing a "just resolution" to the problems. The company said its plant "is free from any form of discrimination, retaliation, or any other workplace conduct that violates the law."

"We are disappointed that the EEOC has issued this determination and strongly disagree with the EEOC's findings," Michael Phelps, Turner Industries' vice president for human resources, said in a written statement.

Lawyers for the seven Turner employees who went to the EEOC displayed photographs of the slurs, of hanging nooses and threatening notes left for employees at the Paris plant during a news conference Wednesday. One of those employees, Dontrail Mathis, told reporters that he was frequently called racially inflammatory names and that most African-American employees were relegated to the paint shop.

Mathis, a painter's helper, said one co-worker who found out he was married to a white woman told him, "In the Bible, it says that white women shouldn't mix with monkeys." When he called Turner's corporate office to complain about that incident, he heard nothing back, Mathis said.

Jason Milligan, a former night foreman at the plant, said his bosses "more or less wanted me to do their dirty work."

"I watched certain people more than I did the others, to see if I could get anything on them that could be used against them," he said. But he said he was fired after he refused to sign an affidavit accusing a Turner employee of theft -- a man he believed had been "set up."

"I'm not going to lie for anyone," Milligan said. "He was a man just like me. He has a family to take care of. I'm not going to do it. And from then on, that was my down-slide."

Milligan worked at the plant for nine months before he was fired. Company officials told him he was sacked for failing a drug test, he said. But a lawyer for the employees, Jay Ellwanger, said Milligan warned testers that he was taking a diet medication that could show up as a stimulant.

Milligan said managers were told to document and clean off any racist graffiti immediately, but he said one such case he handled in his nine months at the plant was "swept under the rug" when the person behind it turned out to be a relative of another manager.

In the year since workers in the Paris plant went to the EEOC, similar complaints have emerged at other Turner factories in Texas, Ellwanger said.

Paris is about 110 miles northeast of Dallas. The Rev. Peter Johnson, a state civil rights leader, said the problems reported at the Turner plant reflect a "culture of discrimination" that lingers in East Texas.

"East Texas is Mississippi 50 years ago. This case will begin to help us unravel the history of discrimination and bigotry throughout East Texas," he said.

CNN's Tracy Sabo and Ed Lavandera contributed to this report.