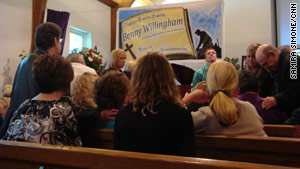 Loved ones of Benny Willingham comfort one another during his funeral Friday in Mullens, West Virginia.

Mullens, West Virginia (CNN) -- Benny Willingham was the type of person who would make sure you got home safely after he jumped your car battery. The kind of man who made sure to fix a leaky faucet or take out the trash at church. The grandpa who would never miss a grandson's ball game, even if he had to pull the first shift at a coal mine just hours later.

Willingham, 61, was laid to rest Friday, four days after a massive mine explosion at the Upper Big Branch coal mine in Naoma snatched his life and those of at least 24 others.

Hundreds filed into tiny mountain churches Friday to mourn four of their loved ones in southern West Virginia, where faith runs as rich and deep as the very coal seams that thousands risk their lives to extract.

Willingham was depicted as a larger-than-life figure who had three loves: God, family and coal. His death -- just five weeks before his planned retirement -- caught the community off guard. But then again, many said he was ready to go.

In his last testimony at the Family Worship Center, Willingham told the congregation, "If I die tomorrow, I've lived a good life."

"I'm not just talking about a Christian, I'm not saying a servant of God," his pastor, the Rev. Gary Pollard, told the mourners who packed the Pentecostal chapel in Willingham's hometown. "He was a man of God."

Willingham was a member of the mine's "Old Man Crew" -- a pack of seasoned miners known for their toughness and expertise underground at the mine, owned by Massey Energy Co. While he was looking forward to retirement, he wasn't sure it would suit him -- "he loved the work," Pollard said.

Around here, there's great weight put into being saved by the church -- a significant moment in one's life that's supposed to bring the grieving some comfort. Willingham was saved 19 years ago, Pollard said, and tried to spend time each day helping those he encountered.

The pastor recalled that the coal miner had given a way a vehicle to a man he barely knew, knowing that he wouldn't need the car as much during retirement and that the man was struggling to get to work every day.

"That's just the way Benny was."

Willingham oversaw a large family full of children and grandchildren. His grandson Travis wrote a letter to his late grandfather this week that, when read aloud during the service, moved the chapel into deeper sobs.

"I've been talking to you for the past week -- I know you can hear me, you just can't talk back to me," Travis wrote. He thanked his "Pawpaw" for the turkey rifle and for attending his baseball games. He also asked for his grandpa's help in getting the rest of the family saved -- "that way we can all see each other again."

Those little boys had that mountain of a man wrapped around their fingers -- and he loved it.
--Rev. Garry Hall, on Carl "Pee Wee" Acord's love for his grandsons
RELATED TOPICS

Near the epicenter of grief, just a few miles from the mine, the funeral of Scott echoed hundreds of years of coal country tradition.

Some 150 mourners packed two small rooms at a funeral parlor in Whitesville. A group of women in the front sang in the high, lonesome sounds made famous by Appalachia. Pastor Donnie Russell struggled to give the eulogy, saying Scott's was the "toughest funeral I've ever had to preach at."

Russell said Scott, 58, was like a brother to him -- a family man with enormous faith who loved to play Dolly Parton's song, "God's Coloring Book" on his guitar and who helped Russell's wife become saved in the church.

Then the preacher spoke to the tragedy on the mountain, saying that the world is watching Montcoal.

"I'm not angry at Montcoal mountain, and neither should you be," he stressed, referring to the mining operations there. "That mountain provided for my family for 90 years."

Dozens broke the silence in agreement with Russell, who said, "I wouldn't trade the love and friends of these valleys and mountains along this river... for all the open plains of this country. I wouldn't trade it for anything."

Across the hills, in Beckley, the community said farewell to Carl "Pee Wee" Acord, another member of the "Old Man Crew" who was killed in Monday's blast.

Despite his nickname, Acord, 52, was remembered as a "mountain of a man" known to be a little gruff, but mostly peaceful.

"He spend his whole life on the same piece of land," his lifelong friend, Pastor Garry Hall, told friends and family in mourning.

Acord was an experienced coal miner who could be trusted hundreds of feet underground to get the job done right. But later in life, his conversations with friends were less about the business of coal and more about his little grandsons.

"He was like a little old woman, pulling out pictures all the time," Hall recalled, in a brief moment of levity during the service. "Those little boys had that mountain of a man wrapped around their fingers -- and he loved it."

Saved seven years ago, "there's no doubt Pee Wee is with the Lord," the pastor said.

Still, despite the words meant to bring peace and comfort to the mourning masses, it was clear that it will take time -- mountains of time -- for these mountain communities to heal.