Atheists cite resurgence as they gather on Easter weekend 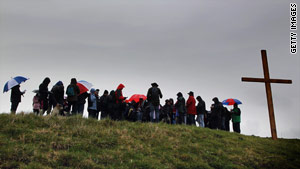 (CNN) -- While millions of Christians worldwide will celebrate Easter this weekend, David Silverman has other plans.

Silverman will join about 300 atheists in a Newark, New Jersey, hotel ballroom to proclaim another message: The atheist movement in America is growing.

Silverman will participate in the 36th annual American Atheists National Convention at the Newark Liberty Renaissance Hotel. He'll also try to clear up a misconception: Atheists aren't immoral, and they don't worship Satan.

That's what many people assume when he tells them that he belongs to an atheist group, Silverman says.

"We have a lot of wonderful people," he said. "I haven't sacrificed any Christian babies. I haven't danced naked under the stars. I haven't stolen anything."

What Silverman is doing instead is talking up the "resurgence" among atheists. He says atheists once felt isolated and misunderstood.

Two events changed that, he says: the rise of the Internet and the election of George W. Bush.

Bush's polarizing presidency showed people how bad things could turn "if religion was in charge," he said. The Internet showed atheists that they weren't alone, as they sought out and encouraged one another.

"Closet atheists are coming out all over the country," Silverman said, estimating that his group has 4,000 members. "Anybody can go on the Internet and read blogs, Facebook pages, and know that there are millions like them."

Those who ask why people need God are also raising their public profile in other ways. Richard Dawkins, author of "The God Delusion," and Sam Harris, author of "The End of Faith," have best-selling books questioning the need for religion.

Silverman says a coalition of groups, including American Atheists, met with White House officials in February to discuss more tolerance for nonbelievers.

He takes pains to say that atheists respect those who believe otherwise. But if that's so, why hold a convention on Easter weekend?

Silverman chuckled at the question.

"It's not a slam against Easter," he said. "We always have our national convention on Easter weekend. The hotels are cheap, and everybody has time off."