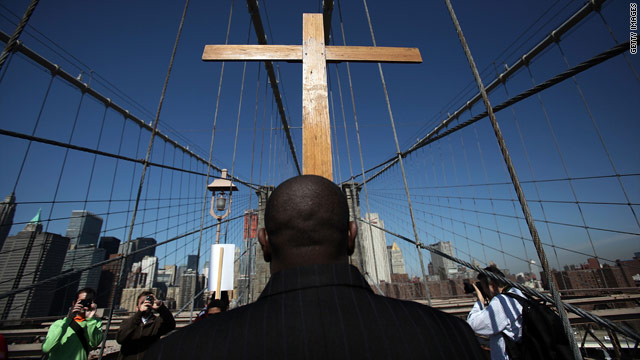 The Way of the Cross procession crosses the Brooklyn Bridge in New York to celebrate Good Friday on Friday.
STORY HIGHLIGHTS

(CNN) -- As the priest abuse scandal continues to roil Europe, a growing chorus of American Catholics pressed the Vatican to adopt the same reforms that the U.S. Catholic Church did in 2002, following revelations of a similar abuse scandal.

The American reforms, adopted by the U.S. Catholic bishops the same year the Boston, Massachusetts, scandal broke, include a zero tolerance approach toward priests who are known to have abused children; mandatory reporting of abuse allegations to authorities; and the creation of local boards of lay Catholics to respond to such allegations.

"The tragedy is that the Europeans didn't get their house in order when they saw what was happening in the United States because they thought [abuse by priests] was an American problem," said Thomas Reese, a Jesuit priest at Georgetown University. "If they had adopted our reforms, they would be in a much better situation today."

Though the 2002 reforms were adopted as binding church law in the United States, neither the Vatican nor the Catholic Church in Europe or other parts of the world followed suit. This week, Reese and other prominent Catholics began calling for the Vatican to do so.

Video: Jail or treatment for molesters?

"There is no need to reinvent the solution to the problems in Europe," said Nick Cafardi, dean emeritus of Duquesne University's School of Law, who has advised the U.S. church on abuse. "We already have one, and it's the canon law in the United States. It needs to be made law for the entire world."

Bishops' conferences in some European countries have already informally adopted certain American reforms, particularly the so-called one strike and you're out rule for abusive priests. "In many European nations, the groundwork has already been laid," said John Allen, CNN's Vatican analyst.

But it's difficult to know if the Vatican will follow the American church's lead, even as the abuse allegations have been piling up in Germany, Austria, Switzerland and the Netherlands. That's because bishops generally avoid publicly giving advice to the pope -- the lone church official who could institute a global church reform.

With the Catholic Church facing hostile governments in some countries, church experts say the Vatican is unlikely to globalize the U.S. rule requiring church officials to report abuse allegations to the police.

But Vatican watchers say some sort of reforms are possible. "Developments in Europe have kick-started the Vatican on a couple levels," said Allen, who is also senior correspondent for the National Catholic Reporter. "One is that they need to do something, but another is on a PR level -- of showing that they're doing something."

There is disagreement over how effective the American reforms have been. Many American Catholics say the 2002 reforms -- called the Dallas Norms after the Texas city where they were adopted -- have been shown to work.

The reforms require an annual report from the U.S. bishops on the number of abuse allegations against the church and a tally of confirmed offenders. The most recent report, issued in March, found the fewest number of victims, allegations and offenders since 2004.

If they had adopted our reforms, they would be in a much better situation today.
--Thomas Reese, Jesuit priest at Georgetown University
RELATED TOPICS

Critics say the reports lack credibility because they depend on bishops' self-reporting allegations and cases of confirmed abuse.

"These are the same bishops that got us into this mess to begin with," said David Clohessy, director of the Survivors Network of those Abused by Priests, a victims' group. "After hiding these crimes for decades, we're supposed to think that they did a 180 [degree turn] and are now fully forthcoming?"

Clohessy's group and other victims' organizations want the church to open its archives on abuse charges and have called for the firing of bishops who covered up the abuse.

"To be honest, we would oppose the Vatican adopting the U.S. norms because they are so vague and weak and are only sporadically enforced," Clohessy said. "The evidence has shown that no institution can police itself."