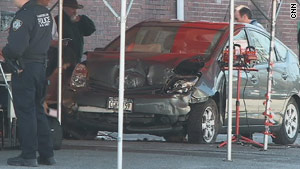 Authorities say the data recorder of this Prius shows the accelerator, not the brake, was engaged.
STORY HIGHLIGHTS

(CNN) -- A Toyota Prius was not the cause of a March 9 crash in Harrison, New York, said authorities citing "black and white" results in their investigation.

Harrison, New York, Police Capt. Anthony Marraccini revealed at a news conference Monday that evidence extracted from the wrecked 2005 Prius' data recorder showed no indication of brake compression as the car headed toward a stone wall. Rather, the accelerator was pressed 100 percent, authorities said.

Marraccini said the data, which he described as "black and white," was collected in a cooperative effort between Harrison police, the National Highway Traffic Safety Administration (NHTSA) and Toyota.

"Toyota has been very cooperative," said Marraccini. "There's no possibility of any distortion of this data," he continued. "These are the facts that surround this."

A housekeeper was driving the car at the time of the accident. She told police the vehicle accelerated on its own as she eased forward down her employer's driveway, causing her to crash into a stone wall on the other side of the road.

The incident, which did not involve other vehicles nor injuries to anyone, drew attention because the 2005 Prius was part of Toyota's November recall to address the risk of pedal entrapment in the floor mat. But police said early on that floor mats were not a factor in this accident. A recall to address a sticky accelerator problem did not include the Prius.

Monday's announcement corroborates a NHTSA statement from early in the investigation, explaining that "information retrieved from the vehicle's onboard computer systems indicated there was no application of the brakes and the throttle was fully open."

The statement suggested at the time that the driver may have been stepping on the accelerator, instead of the brake as she told police.

"We do see these accidents on occasion," Marraccini said Monday.

"I think with all this hype about Toyota, people are just looking to point fingers," he said.

Marraccini said that he spoke with the housekeeper about the findings of the investigation, but she remains "very passionate about her statement."

"When a driver believes they are on the brake pedal, they believe it. But there is no indication of that," Marraccini said.