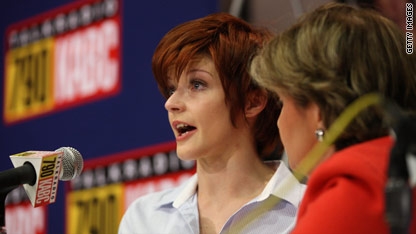 "I just wanted to let the public know what the relationship was and that he has not taken responsibility for his behavior," said Veronica Siwik-Daniels, who goes by the screen name Joslyn James.

"Everyone else can draw their own conclusions from that," she said.

The Web site displayed 120 text messages purported to have been sent to her by Woods between July and October of last year.

The messages document "just a brief part of the time we had together," Siwik-Daniels said.

Woods publicly apologized for his extramarital affairs last month, but he has never disclosed the names of any of his lovers. The golfer's management company did not immediately respond to a CNN request for comment on the text messages.

Many of the texts provide information on hotel room numbers and times for meetings, including instructions to be discreet. A number of messages are explicitly sexual.

The final series of texts suggest that the person communicating with Siwik-Daniels was upset with her because she was almost seen by the sender's agent during an encounter in early October.

Siwik-Daniels told CNN she considered the messages to be "typical of those between someone you are in a relationship with."

She said she gave up her career in pornographic films because Woods was jealous of the idea of her with another man.

Her Web site said she "is now receiving many requests for personal appearances, television shows, film opportunities as well as product endorsements."

But she is not ready to announce her next career move, she said.

"Stayed tuned to find out," she said.

At a news conference last month, which immediately followed Woods' televised apology, she called on the golfer to publicly acknowledge their relationship.

"I would be open to a telephoned apology from Tiger, but I really feel that I deserve to look at him in person, face-to-face, in his eyes, because I did not deserve this," Siwik-Daniels said.

She told CNN Thursday that she has still not heard from him, not even a text message.