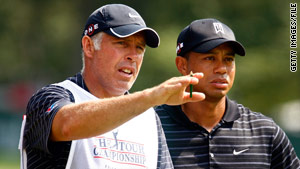 (CNN) -- The man closest to Tiger Woods when he plays golf says he had no idea about the extramarital affairs that have sidelined Woods from the game.

Steve Williams, Woods' caddy and confidant for nearly a decade, talked to New Zealand's TV3 about the scandal.

"I knew nothing," Williams said in an interview posted on the station's Web site Thursday. "I don't need to clarify it, extend that answer. I knew nothing."

Williams said he's heard the calls from some that he should be fired for not preventing Woods' downfall. "In some people's perception, I'm involved with it, and I've committed a crime or done wrong," he said.

"If the shoe was on somebody else, I would say the same thing, it would be very difficult for the caddy not to know," he said. "But I'm 100 percent telling you, I knew nothing, and that's that."

Williams' wife, Kirsty, defended her husband, insisting he would not have been able to keep the secret from her or Woods' wife, Elin Nordegren.

"The four of us are so close," she told TV3. "Being so close, he couldn't know and not say something to Elin or myself. You know, it's just, that's the way it is."

Woods, 34, apologized last month in a tightly controlled televised statement for his "irresponsible and selfish" behavior, which he said included infidelity.

Video: 'I had affairs, I cheated'
RELATED TOPICS

The February 19 statement was his first public appearance since he crashed his black Cadillac Escalade into a fire hydrant and a tree near his home in November. The crash and reports about why it happened sparked a barrage of infidelity allegations against the golfer, who has two children with his wife.

Williams, who gets 10 percent of the millions Woods wins on the golf tour every year, said he would not have kept it secret just to protect his job.

"I'm a straight up sort of person, if I had known something was going on, the whistle would have been blown," Williams said. "He knows that I'm straight up, that's the way I operate."

He said he is disappointed with Woods.

"Of course, I'm mad at him," he said. "Why would you not be? He's obviously let his family down."

Williams said he and Woods will talk about the scandal eventually, but not now.

"When a guy's having a tough time, that's not the time," he said. "It's not up to me to beat him with a stick right now. I mean, he's getting enough grilling from everybody else."

Williams said his role now is to talk to Woods -- who he described as "one of my closest friends" -- about the future and help him get back on the golf tour.

"When you are friends with somebody, and you're a true friend to somebody, that's when somebody needs your support, and that's when they need you the most, that's when you don't walk away," he said.

In his February 19 statement, Woods left open the possibility of returning to professional golf this year.

Williams predicted that Woods would bounce back from his troubles.

With Woods not playing, Williams is spending more time with his personal passion: speedway racing in New Zealand.