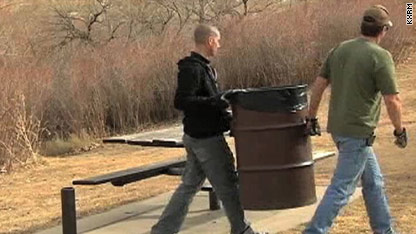 To save money, the city has removed the trash cans.

Need to catch a bus? Don't try on evenings or weekends. The city has cut that service, too.

And when the sun goes down, Colorado Springs is going to look a little bit dimmer. Crews are removing a third of the city's streetlight to save money on electricity and light bulbs.

It's this conservative city's way of closing a $28.5 million budget gap.

"You can cry about the fiscal situation ... or you can take it as an opportunity to change, reinvent yourself and innovate and that's what were going to do in Colorado Springs," City Councilman Sean Paige said.

These aren't people trying to be lazy and live off the system.
--Brian Kates, community center director

Other governments are considering higher taxes to avoid such cutbacks, but in the state of Colorado, there is a taxpayers' bill of rights. It prevents state and city governments from raising taxes unless such a measure is approved by the voters.

"We put it on the ballot last fall, and they said 'no,' " said Paige, a Republican. "They declined to write the city a blank check, and they said, 'City, tighten your belts. We're tightening ours. You need to do the same.'

"We're going to respect that," he added. "I'm not going to cry about that."

It's not a new concept in Colorado Springs, touted on some Web sites as a "libertarian paradise." The city's garbage collection, zoo and philharmonic are all privately funded.

The city is even auctioning off its police helicopters on the Internet.

Want to place a bid?

The latest budget cuts could be felt at community centers like Meadows Park, which is bustling with after-school programs for kids, as well as exercise classes and hot meals for seniors.

Unless the center can find private funding, Colorado Springs is slated to shut it down at the end of March.

"I'm hoping that some sort of a miracle will happen so we can keep the centers open," said Sheryle Nix, 56.

Every day, Nix eats a $2 lunch at the center because she can't afford to eat in a restaurant and has trouble preparing her own food.

"I have a traumatic brain injury, so this really helps keep me on schedule to eat lunch," she explained.

Jeanie Schweitzer, 55, returned to Colorado Springs to take care of her grandmother Elsie, who suffered a stroke. She brings Elsie to the center to get her out of the house.

"I don't think they should be shutting it down. There should be enough money," Schweizer said. "It's not that much in the big picture to keep it open."

The center is a lifeline for parents who work and cannot pick their kids up after school ends in the afternoon.

Lindon Jackson, who is 13, has been coming to the Meadows Park after-school program since she was 3. When asked what she'll do if the center shuts down, she said, "Nothing."

"I'd just be home doing nothing."

Whether the government should continue funding Meadows Park and other community centers like it strikes at the heart of the political argument over the role of government, particularly during an economic downturn.

"The model of governments, from the federal government down to municipal governments, don't work anymore," according to Chuck Fowler, chairman of City Committee, an alliance of local businesspeople set up by Paige.

"They don't take in as much money. They can't possibly provide the same amount of services, pay their employees, pay their pensions. Something's got to give."

Fowler believes that the solution may be in weaning people off of government services.

"The larger the government is, the more conditioning with certain people that they don't need to take personal responsibility of their life," he said.

The budget cuts, according to Fowler, "could really recondition people's ideas about what government should be doing."

"Should it be doing all of these things, or should it really be focused on the vital things that clearly have a public interest?"

But Brian Kates, who runs Meadows Park Community Center, says the people affected by the government cutbacks "are pawns in the game."

"These aren't people trying to be lazy and live off the system," Kates said. "These are hard-working, intelligent and bright [people], and they're not asking for much. We're giving them just the very basics."