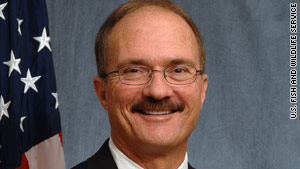 Hamilton, 54, died after suffering chest pains, a symptom reflective of an underlying heart condition, the Summit County, Colorado, coroner said. Hamilton was on a mountain at the Keystone Ski Resort in Keystone, Colorado, when he complained of the pains.

Hamilton had served the U.S. Fish and Wildlife Service for more than 30 years.

"Sam was a friend, a visionary, and a professional whose years of service and passionate dedication to his work have left an indelible mark on the lands and wildlife we cherish," Secretary of the Interior Ken Salazar said in a written statement.

"His forward-thinking approach to conservation - including his view that we must think beyond boundaries at the landscape-scale- will continue to shape our nation's stewardship for years to come."

Hamilton took over the leadership of the U.S. Fish and Wildlife Service in September. He was previously the regional director of the 10-state Southeast region for the agency. He was charged with a $484 million budget and oversight over more than 350 threatened and endangered species and 128 national wildlife refuges, according to the agency's Web site.

While regional director, he also supported the creation of a carbon sequestration program that helped restore about 80,000 acres of wildlife habitat.

His colleague, Thomas Strickland, assistant secretary for Fish and Wildlife and Parks, praised Hamilton's more than 30 years of service to the agency.

"Sam brought more than just a wealth of experience to the job, he brought courage and outstanding leadership," Strickland said in a statement. "The Department of the Interior will miss him greatly."

Hamilton first became involved with the agency when he was 15 years old, as a member of the Youth Conservation Corps in Mississippi with the Noxubee National Wildlife Refuge, according to the agency's Web site.

He is survived by his wife Becky; sons Sam Jr. and Clay, as well as his grandson, Davis.