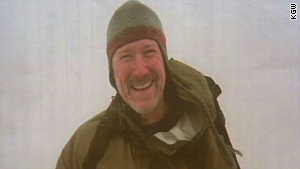 Joseph Bohlig, 52, fell Monday when a cornice on the edge of the volcano's crater crumbled, authorities say.

Mount St. Helens, Washington (CNN) -- A climber who fell into the crater of Mount St. Helens volcano on Monday has been found dead, an official said Tuesday.

A U.S. Naval helicopter lifted the body of Joseph Bohlig, 52, from the south crater wall at 2:45 p.m. local time and flew it to Carson, Washington, for transport to the Clark County Medical Examiner's Office for autopsy, said David L. Cox, undersheriff of the Skamania County Sheriff's Office.

Bohlig, of Kelso, Washington, was at the edge of the volcano's crater Monday when the cornice on which he was standing crumbled, causing him to plunge 1,500 feet down its ice- and rock-covered inner wall, authorities said.

"The snow gave way, the cornice overhang gave way as he was standing there and he essentially fell the distance that he did," Skamania County Sheriff Dave Brown said. "Nobody saw him after he went over the crater rim, didn't see where he landed."

Fellow climber Scott Salkovics told CNN affiliate KGW that Bohlig had handed his camera to another climber and was about to pose for a picture with Mount Rainier in the background when he turned around and took a final step on the cornice.

"Boom, it busted off and I saw him clawing for the edge with a startled look on his face, and then he disappeared," Salkovics told KGW. "I was looking right at him, he was only 10 feet away ... then he just disappeared."

Salkovics and Bohlig had recently returned from a climbing trip in Ecuador and thought it would be fun to do a trip on Mount St. Helens, KGW reported.