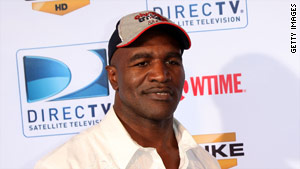 The case was filed last week in Fayette County, Georgia, Superior court, according to the Web site for the county clerk's office.

The listing said the case involves a "family violence ... protective order," but provided no additional details.

The court documents also alleged other acts of violence, including choking, hitting and throwing a bottle of water at her.

Holyfield, 47, is a four-time heavyweight boxing champion with estimated winnings of more than $200 million.

Over the summer, his $10 million home in Fayette County went into foreclosure, but was pulled from the auction block at the last minute.