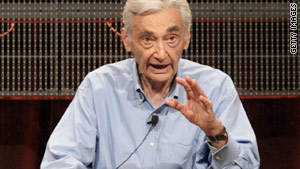 Zinn, author of "A People's History of the United States," was 87. Kabat-Zinn said her father, who lived in Auburndale, Massachusetts," died while traveling in Santa Monica, California.

"A People's History of the United States," first published in 1980, tells a history not often in seen in other books -- from the perspective of those not in a seat of power.

The book was the inspiration for a 2009 documentary, narrated by Zinn, called "The People Speak." The film highlighted people who spoke up for social change, according to the Web site of the History Channel, which aired the program.

Zinn was a shipyard worker and Air Force bombardier before he went to college under the GI Bill and received a Ph.D. from Columbia University, according to his Web site. He taught at numerous universities, including Spelman College in Atlanta, Georgia, and Boston University in Boston, Massachusetts.

Kabat-Zinn said of her father that he lived a "very full and exciting life" and that there were many social issues that were very important to him. Above all, she said, her father believed that there is no "just war."

Zinn's death on the day of President Obama's first State of the Union address was underscored by his contribution to a recently released special from The Nation magazine called "Obama at One."

"I've been searching hard for a highlight," he wrote. "The only thing that comes close is some of Obama's rhetoric; I don't see any kind of a highlight in his actions and policies."

Zinn said he was not "terribly disappointed because I didn't expect that much," noting that he has been "a traditional Democratic president" on foreign policy -- "hardly any different from a Republican" -- and has been cautious in domestic policy.

Zinn also cautioned "that Obama is going to be a mediocre president -- which means, in our time, a dangerous president -- unless there is some national movement to push him in a better direction."