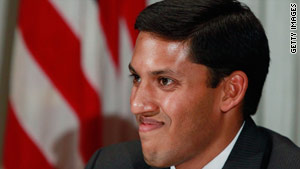 (CNN) -- Dr. Rajiv Shah
President Obama announced Wednesday that Shah, the 36-year-old administrator of the U.S. Agency for International Development, will be in charge of the overall U.S. relief effort in Haiti. "The goal of the relief effort in the first 72 hours will be very focused on saving lives," Shah said.

At Shah's USAID swearing-in ceremony on January 7, Secretary of State Hillary Clinton said, "One only needs to ask his wife, Shivam, the lengths to which Raj will go to achieve important goals. After all, this is a man who flew to India for one day to propose to her at the Taj Mahal when she was traveling there alone. This is also a man who summited the 14,400-foot Mount Rainier -- one of the most difficult climbs in the continental United States, and it combines the challenges of an unforgiving glacier with the unpredictability of an active volcano. That may be the best preparation Raj has for working in Washington these days."

According to his USAID biography, Shah, a medical doctor and health economist, was an under-secretary at the U.S. Department of Agriculture. Prior to joining the Obama administration, Shah served as director of agricultural development at the Bill and Melinda Gates Foundation.

In 2001, Shah was the health care policy adviser on the Gore 2000 presidential campaign and a member of Pennsylvania Gov. Ed Rendell's transition committee on health. In addition, he has served as a policy aide in the British Parliament and worked at the World Health Organization.

Jimmy Jean-Louis
The Haitian native and cast member of the TV series "Heroes" was searching for his elderly parents in Haiti on Wednesday afternoon. Jean-Louis learned that a house he had grown up in had collapsed, killing several of his relatives.

"I have not slept yet. The second house that I grew up in was down, and some relatives have died, from what I have been told," Jean-Louis said yesterday. "I haven't been able to reach my parents. I have heard that they are OK, but I do not know what is going on around them."

Jean-Louis was born in Petionville, Haiti, where he grew up without electricity or running water. He moved to Paris, France, when he was 12 to pursue a modeling career and had supported his parents by sending money home since he started acting nearly 20 years ago. He is the founder of Hollywood Unites for Haiti, a nonprofit organization whose original mission was to provide sports and cultural education to underprivileged youth on the island. The group is now mobilizing for disaster relief.

Pat Robertson
The evangelical Christian, who once suggested God was punishing Americans with Hurricane Katrina, says a "pact to the devil" brought on the devastating earthquake in Haiti.

Officials fear more than 100,000 people have died as a result of Tuesday's 7.0-magnitude earthquake in Haiti. Robertson, the host of the "700 Club," blamed the tragedy on something that "happened a long time ago in Haiti, and people might not want to talk about it." The Haitians "were under the heel of the French. You know, Napoleon III and whatever," Robertson said on his broadcast Wednesday.

"And they got together and swore a pact to the devil. They said, 'We will serve you if you will get us free from the French.' True story. And so, the devil said, 'OK, it's a deal.' " Native Haitians defeated French colonists in 1804 and declared independence.

Martha Coakley and Scott Brown
With less than a week to go until a special Senate election in Massachusetts, the state's airwaves are packed with campaign ads as Democrat Martha Coakley and Republican Scott Brown battle to fill the last three years of the late Sen. Ted Kennedy's term.

Groups outside of the state are supporting the two candidates to the tune of millions of dollars. Brown is hoping to become the first Massachusetts Republican to win a U.S. Senate seat since 1972. Independent Joseph Kennedy, a third party candidate who is not related to the late senator, is also in the race.

The Boston Globe endorsed Coakley on Wednesday, saying the state's current attorney general is more qualified to serve in Washington than her Republican opponent. Brown, a state senator, "believes in a culture of family, patriotism and freedom" and "is a proud member of the Massachusetts National Guard, where he has served for nearly three decades and currently holds the rank of Lt. Colonel in the Judge Advocate Generals (JAG) Corps," according to his Web site.

Teddy Pendergrass
The R&B legend died Wednesday evening at a hospital in Philadelphia, Pennsylvania, the city where he was born. He was 59.

Pendergrass, known for smash-hit love ballads such as "Turn Off the Lights" and "Love TKO," died after a long illness, according to Lisa Barbaris, who described herself as a close friend and his last publicist. His family did not reveal details about his illness, but said it was related to complications from a 1982 car accident, Barbaris said.

The crooner, affectionately known as just "Teddy" by many fans, started in music with a group called the Cadillacs in the late 1960s and was still with the group when it merged with Harold Melvin and the Blue Notes, according to his official Web site. He began as a drummer, but soon became the lead singer after the group heard his powerful voice. In 1972, Pendergrass' baritone could be heard on the classic Harold Melvin and the Blue Notes song "If You Don't Know Me by Now."

After going solo, Pendergrass received several Grammy nominations, Billboard's 1977 Pop Album New Artist Award, and an American Music Award for best R&B performer of 1978, Barbaris said. In 1982, Pendergrass was involved in a car accident that left him paralyzed. But he returned to the studio in 1984 in his wheelchair to record an album. Before his death, Pendergrass was working on a musical documenting his life, called "I Am Who I Am."