Haitians in U.S. wait for news and worry 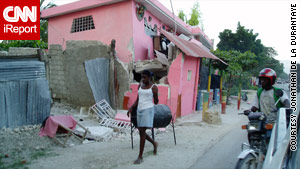 A damaged house in Haiti. Many Americans from Haiti are anxiously awaiting word from relatives.
STORY HIGHLIGHTS
RELATED TOPICS

(CNN) -- With phone lines down and communication cut, Haitians living in America are "sick with worry" and scrambling for information about loved ones who experienced Tuesday's 7.0 earthquake on the island nation.

"At this point it looks like it's worse than we all imagined and we still don't know specifics because of the down power lines," Gepsi Metellus said Wednesday. She is the executive director of the Sant La Haitian Neighborhood Center in Miami, Florida, which provides services to Haitians in South Florida ranging from help with taxes to how to navigate the American school system.

"We are assuming there are a lot more casualties than we might have initially thought," she said.

Metellus said she still hasn't heard from her mother, who splits her time between Haiti -- she lives in Pétionville, a suburb of Port-au-Prince -- and Miami. Her mother flew from Miami to Haiti on Friday. "She's in her 70s. I'm very concerned."

Metellus is also trying to find out how the center can best help people in Haiti, but without information, that's difficult to ascertain at the moment. "There are people who want to drop off medicine and food and water at the center, but we don't even know if that's what's needed, much less if we will be able to get those supplies to the island."

Are you looking for loved ones in Haiti?

Haiti is the most impoverished nation in the Western Hemisphere. Plagued with "political violence for most of its history," according to the CIA World Factbook, the Caribbean island nation has suffered from colonialism, coups and corruption since becoming the first black republic in 1804.

Are you there? Submit an iReport

More than half of the country lives in "abject poverty." The nation imports more than four times the goods it exports and about two-thirds of the labor force lacks formal jobs, the CIA reports. There are 45,000 Americans living in Haiti, and the U.S. Embassy, as of Wednesday, has been able to reach only 40 of them, according to a release from the U.S. State Department.

Metellus said the Haitian community in South Florida numbers from 250,000 to 500,000 people. "The basic infrastructure we're accustomed to here is nonexistent [in Haiti]. To assess the damage is going to be a momentous undertaking."

Disease is rampant in Haiti, and it's still common for children to die from drinking and washing in fecal contaminated water. UNICEF estimates that 70 percent of Haitians do not have access to "safe drinking water and adequate sanitation."

Nyvrose Fleurent of Brooklyn, New York, works for the community outreach group Haitian American United Progress and said most Haitian immigrants in the United States have family still on the island. They often financially support family members who aren't able to leave, she said.

Fleurent said this Tuesday while watching the news. Earlier in the morning she had hugged her brother goodbye before he flew to the Port-au-Prince airport in Haiti.

Fleurent, 38, remains hopeful her family will be unharmed. Her brother and cousins reside in Cap-Haïtien, in the north, on the opposite side of the country from Port-au-Prince, the city closest to the earthquake's epicenter.

Even so, she worried about the impact the quake will have on her struggling home country.

"The people who live there can barely make it," Fleurent said. "They can't even eat and get money for their basic needs, so this is going to be a big blow for them. I don't know where Haiti is going to be in the future. It's already so bad."

Harley Etienne, a Georgia Institute of Technology professor of public policy, fretted Wednesday about his uncle, cousins and his best friend's mother who live in a suburb of Port-au-Prince. "It's all making my family here [in the U.S.] very nervous and scared," he said. "My uncle lives on a hill so it's quite upsetting. He lives in the same house that my father and his six brothers and sisters grew up in."

The State Department Operations Center has set up the following number for Americans seeking information about family members in Haiti: 1-888-407-4747