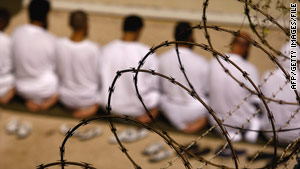 "We will not be returning detainees to Yemen at this time" due to the "unsettled situation" in the country, Obama told reporters in a statement on the failed Christmas Day terror attack on a U.S. airliner.

Obama said his government remains committed to closing the Guantanamo facility, which will require transferring the roughly 200 remaining detainees to either an Illinois prison, their home countries or a third country.

The Guantanamo facility was "a specific rationale" for the creation of al Qaeda on the Arabian Peninsula, the group linked to the botched December 25 bombing attempt of Northwest Airlines flight on its final approach to Detroit, Michigan, Obama said.

U.S. authorities have said 23-year-old Faruk Umar AbdulMutallab may have received training from al Qaeda in the Arabian Peninsula, which is based in Yemen.

On Christmas Day, AbdulMutallab allegedly attempted to blow up an international flight into Detroit, Michigan.

On Sunday, John Brennan, the assistant to President Obama for homeland security and counterterrorism, said the transfer of Yemeni detainees at Guantanamo Bay back to Yemen would continue after careful review of the situation.

The United States is working with the Yemeni government to make sure "the situation on the ground is taken into account," Brennan said on CNN's "State of the Union."

"We're going to do this the right way at the right time," he said.

Closing the Guantanamo facility is necessary because al Qaeda and others have used it as a propaganda tool against the United States, Brennan said.

Most congressional Republicans oppose closing the Guantanamo facility, and some Democrats and independents said Sunday that no detainees should be sent to Yemen due to the terrorist network operating there.

"It would be irresponsible to take any of the Yemeni detainees in Guantanamo and send them back to Yemen," Sen. Joseph Lieberman, an independent from Connecticut who belongs to the Democratic caucus, said on the ABC program "This Week."