Pardon or not, it's business as usual at Billy the Kid Museum 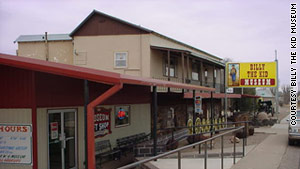 The Billy the Kid Museum in Fort Sumner, New Mexico, welcomes about 20,000 visitors each year.

(CNN) -- Some say he was a cold-blooded killer and a callous thief. Others dismiss his penchant for gun battling and horse stealing as merely "the way it was" in the Wild West. Some celebrate his legendary disdain for authority.

One thing that is hard to disagree on is that William H. Bonney, better known as Billy the Kid, is an enduring figure in American lore.

That's why Roy Rogers, Paul Newman and dozens of others have portrayed the 19th-century gunslinger in the more than 50 movies. That's why we are still talking about him 130 years after Sheriff Pat Garrett shot and killed him in Fort Sumner, in what was then New Mexico Territory.

The gunslinger's lasting mystique has Gov. Bill Richardson, D-New Mexico, spending some of his final hours in office deciding whether he should make good on a pardon allegedly promised to Billy in exchange for his testimony in a murder trial.

The pardon was never given (many say it was never offered), and some argue this broken promise may have kicked off a chain of events that resulted in Billy the Kid's death.

Back in Fort Sumner, Graceland for "Kid" fans, the proposed pardon is much ado about nothing, says resident Tim Sweet.

"What good is that going to do?" asks Sweet, who along with his parents, Ed and Lulu, owns and operates the Billy the Kid Museum on Sumner Avenue. "This isn't going to change anything."

A pardon might not do anything for Billy, but Sweet says a governor about to exit the spotlight might benefit.

"It's a publicity stunt" says Sweet, "and it's working. You just called me."

And it wasn't just CNN wanting him to weigh in on the pardon. The day before, he was on a New York radio program and was even interviewed by a television network in Germany.

"I couldn't buy this type of advertising!"

Whether America's most infamous Wild Westerner gets his posthumous walking papers or not, Tim Sweet will show up to work as usual on Monday morning just like he and his parents have done since Sweet's grandfather opened the museum in east-central New Mexico in 1952.

He'll welcome some of the museum's more than 20,000 annual visitors, where he'll proudly show off wagons, artwork and pistols from the era, including the rifle he says Billy is holding in the only known photograph taken of him.

Because clean record or not, Billy the Kid will always be an American legend.