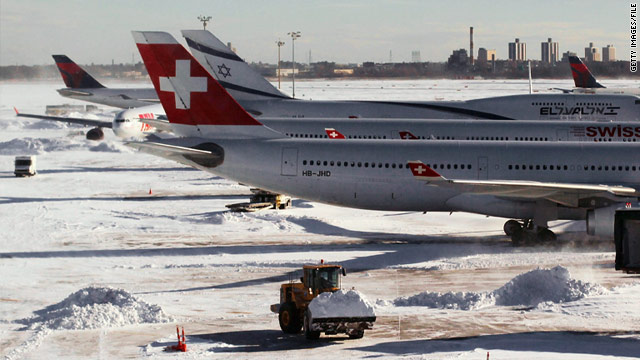 New York (CNN) -- Airline passengers who spent 11 hours stuck on the tarmac at John F. Kennedy International Airport were unloaded Tuesday afternoon in the latest example of the frustrating effects of a massive blizzard that delayed thousands of would-be holiday travelers.

The airport, airline and government officials engaged in finger-pointing over delays on the tarmac.

"There were a lot of people on the plane crying," said passenger Christina Edgar. "It was really a tough situation."

She called the situation "just a bad judgment call."

"They kept trying to get us to go, and they kept us on the plane with no choice," Edgar said.

Travelers aboard the Cathay Pacific Airways flight from Vancouver, British Columbia, arrived in New York at 2:12 a.m. ET on Tuesday.

They got off the plane shortly after 1 p.m. ET.

Passenger Max Ascui told "AC360" that the crew did a good job but couldn't provide answers on what would happen.

Cathay Pacific spokesman Gus Whitcomb said the airline's intention was "to get passengers to New York as quickly as possible, and we anticipated to have gate space available."

He said the gate typically assigned to the airline had been moved "because of what became a very fluid situation at JFK due to the weather."

"We also had four flights come into LaGuardia, but because they were domestic flights we were able to get them off," said Port Authority spokesman Steve Coleman.

Coleman said that because the JFK flights were international, they had to be unloaded in specific customs areas to undergo screening.

"There is just no place that you can dump 1,000 people in a secured area for a period of time," Coleman said.

The airline's website advised passengers on other flights scheduled for Tuesday to check for confirmed departure times before traveling to the airport.

A British Airways spokesman also blamed a lack of gate space for the seven-hour stranding of its passengers on a flight from London.

Aeromexico's Flight 404 landed at JFK from Mexico City at 1:15 a.m., more than two hours behind schedule, but passenger Cristobal Alex said it was six hours before he could walk off the plane.

"We were running out of food and water and the pilot came on to say he had been arguing with the folks at the airport to at least let the police come on board to deliver some food and water," Alex said. "And I guess he lost that fight -- nobody came on."

The airport keeps buses ready to help remove passengers from planes stranded on the tarmacs, "but sometimes the airlines don't inform us," said Coleman.

The Aeromexico jet pulled up to a gate after several hours on the tarmac, but the doors stayed closed until 7 a.m. ET, Alex said.

"Apparently, what happened was the Customs folks went home at 1 a.m. and so everybody coming international kind of had to sit out there in the snow all night," he said.

"It's possible" the lack of a customs staff caused the deplaning delays for international flights, Coleman said, "and that's why we have to look into the whole situation."

"It might have been a situation where too many planes came in with not enough gate space for them," Coleman said.

However, a U.S. Customs and Border Protection spokesman in New York said those reports were incorrect.

"For flights arriving after midnight, there is usually one terminal available which is always staffed with Customs officers," said Saleh.

He said Customs officials have been taking multiple shifts to ensure ample staffing, noting that agency has no involvement in passengers deplaning or the removal of their cargo.

Saleh said it is the responsibility of the airlines to notify Customs officials when arriving at JFK.

The fourth international flight stuck on the tarmac was another Cathay Pacific flight, according to the Port Authority, but it was not known where that flight originated or how long it was stranded.

For the passengers who were able to deplane after several hours, some had more frustration ahead -- they were informed they could not access their luggage.

Tai Nickel, a passenger aboard the Aeromexico flight, said "most people were calm" as they waited inside the plane.

"But once we got out, people were more upset because there were no bags," he said.

British Airways Flight 183 arrived in New York a few minutes early Monday night, but it took seven hours before a gate was opened "due to the weather-related problems they have been having lately," an airline spokesman said Tuesday morning.

"We fully apologize to customers for this delay, but it is outside our control what parking stands we are allocated," said the British Airways spokesman.

On the Aeromexico plane, Alex credited flight attendants for keeping their composure.

"They were actually quite nice and pleasant and had a smile on the face throughout the whole ordeal," he said.

Passengers on several other flights also posted Twitter messages complaining they were stuck on the tarmac at JFK overnight.

The Airline Passengers Bill of Rights, which prohibits airlines from letting passengers stay on grounded planes for more than three hours, doesn't apply in these situations.