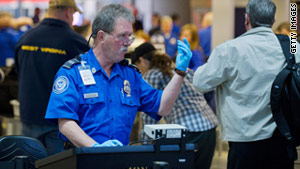 The TSA indicates that insulated beverage containers will be a focus of security efforts at U.S. airports.
STORY HIGHLIGHTS

The announcement came during the Christmas holiday, traditionally one of the busier times at airports nationwide.

Passengers can still carry insulated beverage containers through security and onto flights, the Transportation Security Administration said in a statement.

But, the agency added, airport security officers alerted passengers that they will observe "additional security measures ... in the coming days" on such items. That includes X-ray screening, checks for trace amounts of explosives and close physical inspections -- all using

The agency said that the new approach was brought about because it is "carefully monitoring information related to terrorist tactics and working with out international partners to share information."

Still, the statement did not offer any details on what, specifically, provoked the change.

Reasons why you might get a pat-down
RELATED TOPICS

The ban on liquids more than 3.4 ounces (100ml) bottle or less (by volume) remains in effect, meaning the new focus pertains to the material that makes up items like thermoses and similar containers.

An advisory put out by the Transportation Security Administration notes that the alert applies only to insulated drink containers, meaning some will types may not get extra screening.

The move is the latest in a series of recent moves affecting air travel security, many of them applying to bomb or otherwise dangerous material potentially being hidden in standard items like shoes, hats and more.

The most controversial came shortly before the Thanksgiving holiday rush, when the TSA implemented new security procedures involving full-body scanning machines and "enhanced" pat-down procedures. The TSA requires that anyone setting off a metal detector and then refusing to be screened in the scanner be searched manually by one of its agents. Those who refuse risk a $11,000 fine.

And on November 30, the Department of Homeland Security announced that all passengers on flights within and to the United States were being checked against government watch lists.