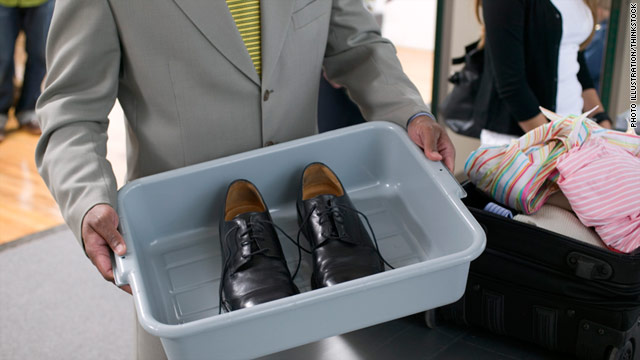 Removing your shoes topped the list for the most dissatisfying aspect of flying, according to a survey.
STORY HIGHLIGHTS
RELATED TOPICS

(CNN) -- When it comes to airport security, Americans have a case of cold feet.

Thirty-seven percent of air travelers rank removing their shoes at the airport as the most dissatisfying aspect of their flying experience, according to a survey conducted for the U.S. Travel Association, a nonprofit oranization hoping to increase travel to and within the United States.

Even amid recent outcries against new security measures, taking off shoes before going through a metal detector ranked more negatively than both pat-down body searches and full body X-ray scanning, according to the survey, which was conducted online by Consensus Research Group and included 1,000 air travelers who have flown in the past two years.

"What the shoe issue has become for travelers is really demonstrative of the inefficiencies and lack of creativeness in the system today," said Geoff Freeman, executive vice president of the U.S. Travel Association. "If we put our minds to it, we can help people keep their shoes on their feet."

Full body pat-downs and body scanners were the last straw for many passengers, Freeman said, and 75% of those surveyed agreed that there must be a better way to provide air travel security than the measures that are taken today.

The majority of respondents said that security screening procedures were inconsistent and stressful, while about 40% sai their experiences was embarrassing, intimidating or intrusive, according to the survey. Thirty percent said that the screenings were fair and only 23% deemed them as effective.

Even with the criticisms about security measures, 82% of people had either positive or neutral experiences flying. Only 18% of respondents rated their travels as negative.

"If three out of four customers are saying 'There must be a better way,' you've got two choices," Freeman said. "Change to thrive or keep the status quo and lose your customers in the process."