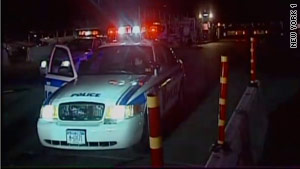 The Moscow-bound Boeing 767 carrying 193 passengers and 11 crew members was forced to turn back after its left engine automatically shut down, FAA spokeswoman Holly Baker said.

Steve Abraham, the president of JFK's air traffic control office, spoke to the controller who handled the flight.

The controller described "what he thinks could have been a flame followed immediately by a good-sized plume of black smoke," Abraham told CNN.

But Baker said no fire was involved with the flight.

The incident occurred about a mile from the airport at an estimated altitude of 1,500 feet, Abraham said, adding that "the engine may have suffered a compressor stall," similar to a car backfiring.

The plane dumped fuel over the Atlantic Ocean before landing, Abraham said.

The flight's passengers were put on another jet scheduled to depart at 8 p.m. for the nearly 10-hour flight to Moscow.

Also Sunday, a Delta flight departing Atlanta, Georgia, was forced to return to Hartsfield-Jackson Airport after declaring an engine failure. The plane, also a Boeing 767, scraped its tail upon landing, according to the FAA, but taxied to the gate without assistance. There were no reports of injuries.