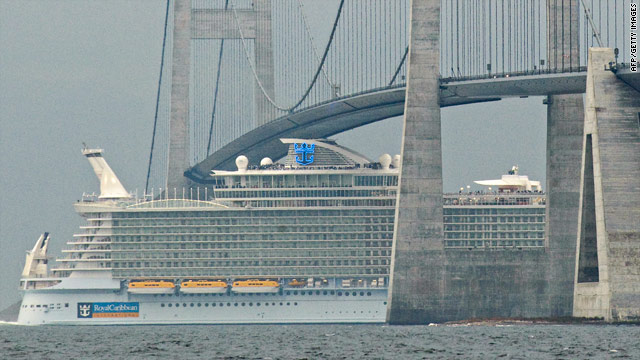 (CNN) -- It was a tight squeeze for a giant new cruise ship sailing from Europe to its home port in Fort Lauderdale, Florida, over the weekend.

Royal Caribbean's Allure of the Seas passed under Denmark's Storebaelt Bridge with about a foot to spare, drawing applause from people on board the ship.

The captain called it "the great excitement of the day."

The normal height of the ship from the water level to the top is about 73 meters (240 feet), said Capt. Hernan Zini, but the vessel couldn't be higher than 65 meters (213 feet) in order to safely go under the bridge, the captain said.

To make that happen, the crew lowered the ship's retractable twin smokestacks, carefully adjusted the ballast so the ship wouldn't be too light (and therefore sitting too high in the water) and boosted its speed.

"When you increase the speed in relatively confined waters, the ship has a suction effect from the bottom, and that actually makes the ship go a bit deeper into the water," Zini said.

The plan went off without a hitch, and the ship safely cleared the bridge.

Video: Watch from up close (advance video to 2:05)

The vessel is the sister ship of the Oasis of the Seas. The pair are the largest cruise ships in the world.

The Allure of the Seas is scheduled to arrive in Florida on November 11. Its official naming ceremony will take place on November 28, and the ship will sail on its inaugural cruise in early December.