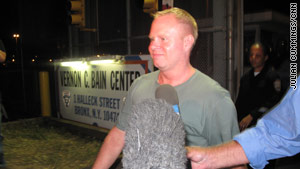 Steven Slater leaves jail in August after posting bail. He is scheduled to appear in court Tuesday.
STORY HIGHLIGHTS

New York (CNN) -- A former JetBlue flight attendant -- who reportedly cursed a passenger over a plane's public address system, deployed the emergency evacuation slide, and then used it to dramatically exit a flight at JFK airport in August -- may plead guilty to a misdemeanor Tuesday as part of a plea bargain with the Queens district attorney.

Steven Slater is scheduled to appear in Queens Supreme Court on Tuesday morning for a conference meeting to discuss a settlement.

"It is on in court for conference tomorrow," said Meris Campbell, spokesperson for District Attorney Richard Brown.

Slater defense attorney Daniel Horwitz said last month he was negotiating a plea deal with the D.A. "We look forward to resolving this matter amicably with the district attorney," Horwitz said.

The district attorney has said his office is considering "an alternative sentencing program, at the defendant's request."

Such a plea bargain would involve Slater's participation in anger management and alcohol counseling programs. In return, Slater would be allowed to plead guilty to a reduced charge, likely a misdemeanor, sources said.

Brown charged Slater with reckless endangerment, criminal mischief and criminal trespass, all of which could theoretically carry a seven-year sentence in prison.

Slater has pleaded not guilty.

JetBlue suspended Slater immediately after the August 9 incident at JFK. He resigned from the airline last month.

Slater's first court-appointed attorney had said a passenger hit Slater on the head with either the overhead bin or luggage, triggering his outburst. But some passengers who were on board the flight raised questions about that account.

Slater's apparent "Take this job and shove it" action generated hundreds of thousands of fans on the internet. Hollywood public relations veteran Howard Bragman agreed to represent Slater amid speculation the former flight attendant's notoriety could lead to a television contract.

"The court is the first issue," Bragman told CNN. "I want to resolve that and then we'll deal with the rest."