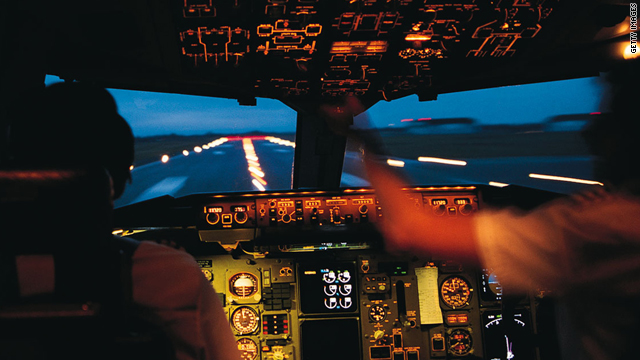 The FAA proposes a nine-hour minimum for rest prior to a pilot's duty period, a one-hour increase over the current rules.
STORY HIGHLIGHTS
RELATED TOPICS

Washington (CNN) -- The House Aviation Subcommittee heard statements Thursday from pilot and air-industry representatives as part of a push to improve rules on flight time for pilots, including duty and rest requirements.

The Pilot Flight and Duty Time Rule currently under consideration would consolidate current rest requirements, which vary depending on whether the flight is domestic, international, or unscheduled (as with charter flights). The proposal would provide for a nine-hour minimum rest period prior to duty, a one-hour increase over current rules.

Cumulative fatigue would also be addressed. New limits would be established and downtime increased where current rules apply.

The proposal, according to Margaret Gilligan, the associate administrator for aviation safety with the Federal Aviation Administration, would provide "a single, scientifically based regulatory approach" to fatigue mitigation. She said she believes the new rules have "the potential to provide a cooperative and flexible means of monitoring and mitigating fatigue during operations."

Dr. Gregory Belenky, with Washington State University's Sleep and Performance Research Center, reprised earlier testimony in which he described the ways that sleep deprivation can increase the possibilities for pilot error. He also discussed his research on the science of sleep and fatigue countermeasures.

Over the past 15 years, fatigue has been linked to more than 250 fatalities in air carrier accidents, according to the National Transportation Safety Board.

Pilot fatigue was cited as a chief contributor to the February 2009 crash of Colgan Air Flight 3407. Fatigue was linked to questions about the crew's ability to recognize the plane was in trouble and how to correctly respond.

The commuter plane nosedived into a house near Buffalo, New York, killing all 49 people on the plane and one person on the ground.

FAA Administrator Randy Babbitt, a pilot with the old Eastern Airlines for 25 years, said the plan, if approved, "would strengthen the requirement that a pilot has to report fit for duty, fit for the mission that he or she is about to undertake. And that means being fully rested."

Babbitt added that the responsibility would be placed "with equal weight upon the carrier," to make sure commercial pilots "get the amount of regulatory rest required that's being proposed here."