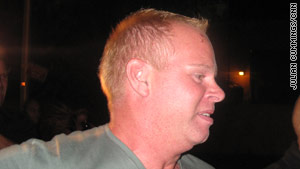 New York (CNN) -- An attorney for Steven Slater, the JetBlue flight attendant who made headlines in August when he deployed a plane's emergency chute and walked off the job, indicated in court Tuesday that discussions about a possible plea agreement with prosecutors were under way.

"We look forward to resolving this matter amicably with the district attorney," said Daniel Horwitz, Slater's attorney. "Mr. Slater wants to get on with his life, and that's why he resigned from his job voluntarily."

District Attorney Richard Brown said his office is considering "an alternative sentencing program, at the defendant's request, representing the fact that he recognizes the seriousness of this event."

"His actions could have led to serious injury, or get someone killed -- and passengers would have been alarmed," Assistant District Attorney Ben Mantell told the judge. However, he added, "We are interested in counsel's request" to discuss a plea bargain.

Brown also criticized what he called the trivial manner in which the media depicted the event.

"This was a serious incident... the estimated cost of replacing the chute is $25,000, and the disruption to air travel was considerable."

Brown said his office would consider requiring Slater to enter anger management and alcohol/drug abuse counseling programs as part of a plea agreement. "Nothing is off the table," Brown asserted, including possible jail time.

Slater, who wore a blue suit and stood at attention at the defense table, will return to court October 19.

He faces felony charges of reckless endangerment and criminal mischief along with the offense of criminal trespass. If convicted, he could face a maximum of seven years in prison.

Slater has pleaded not guilty to the charges.

The flight attendant became a hero to some after the August incident when, authorities said, he grabbed some beer and triggered an inflatable emergency chute to leave a plane at New York's John F. Kennedy International Airport, reportedly after arguing with a passenger.

As of Tuesday morning, the still-popular Slater had amassed more than 210,000 "fans" on a public Facebook page.

The drama on Slater's last flight may have started well before takeoff.

"With great difficulty, they were shoving the bags around, attempting to get it in. Steven came over to assist and either the bag or the overhead [bin door] hit him in the head and at that point he suffered an injury."

After various exchanges with the woman and a crew member, some passengers said, Slater used the plane's public address system for a farewell message that included profanity, and grabbed some beer from the beverage cart before deploying the emergency slide and leaving.

Though many had already thought Slater's fate with JetBlue had been sealed, over the weekend the airline officially announced that Slater no longer worked for the airline.

Airline spokeswoman Jenny Dervin told CNN on Saturday that the separation occurred last week, but declined to elaborate on how Slater and the company parted ways.