By Eva Vasquez, Special to CNN 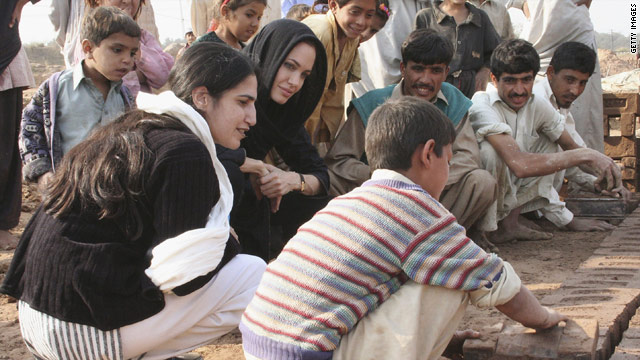 Many organizations see a benefit to having high-profile celebrities such as Angelina Jolie represent their causes.
STORY HIGHLIGHTS
RELATED TOPICS

(CNN) -- It's hard to think about humanitarian travel without picturing Angelina Jolie and other high-profile volunteers. But how much do celebrities contribute to the growing appetite for volunteering away from home and is it all positive?

One thing is for sure, in our celebrity-obsessed culture many organizations see a benefit to having celebrities represent their causes.

Jolie is a good will ambassador for UNHCR, also known as the United Nations Refugee Agency, and UNICEF has a number of celebrity ambassadors, including Liv Tyler, Sarah Jessica Parker and Clay Aiken.

"UNICEF's celebrities have a wide range of talents and achievements, but they all share a commitment to improving the lives of children worldwide," said Marissa Buckanoff, a spokeswoman for UNICEF. "And in each case a celebrity's association with UNICEF comes about because he or she has already demonstrated that commitment."

But probably the most valuable thing a celebrity can offer is the attention he or she brings to the cause.

"When a celebrity goes to another country the media is there," said Erin Rank, the president and CEO of Habitat for Humanity of Greater Los Angeles, California. "Celebrities help bring the spotlight to the need for shelter with Habitat for Humanity."

International superstar Ricky Martin made a big impact for Habitat for Humanity when he traveled to Thailand after the tsunami in 2004. "He went to the area and brought enough awareness to the issue to raise funds for 225 homes for families in the region," Rank said.

While celebrities have huge marketing appeal and can bring an incredible amount of awareness to a cause, they're probably not the prime driver for participating in humanitarian travel. "Natural disasters, mainly disasters are probably the biggest push," said David Clemmons, the founder of VolunTourism.org, which offers news, research, travel suggestions and other resources for anyone interested in volunteer tourism, known as voluntourism.

Nancy McGehee, an expert on voluntourism research at Virginia Tech, agreed that celebrity involvement is not the most influential reason for volunteer travel.

"Research has shown that people are more likely to participate in a volunteer tourism experience if they have the support of their networks -- primarily family, friends and co-workers," she said. "My guess would be that the approval of those close to you is more important than what any celebrity is doing."

Still, the public's interest in celebrities is a powerful force.

Look to the Stars is a website dedicated to following celebrity giving and philanthropic work. "Our main aim is to inspire fans to support charities and causes by following the footsteps of their favorite celebrities," said Tim Saunders, the features editor and online content manager of the site.

The site generates responses from readers who want to know more, Saunders said. "We regularly receive requests from readers about stories featuring celebrities who have traveled to areas for humanitarian purposes," he said. "Most of them ask how they can become involved on a firsthand basis -- they see what their heroes are doing, and they want to help."

Volunteering on vacation is without doubt on the rise. "When I started back in 2000, Google didn't have a search term for 'voluntourism.' They would ask you 'did you mean volunteerism,' " said Clemmons.

Now when you type in "voluntourism," you get more than 300,000 hits. "For something that is still very much in its infancy the fact that there is so much interest in it is a very telling thing," he said.

Habitat for Humanity sees the same high interest. "Most of our global village trips are filled throughout the year," Rank said.

When it comes to how much a celebrity's participation prompts others to engage in humanitarian travel, information is lacking. But there is plenty of research from the marketing perspective.

"Research in the marketing arena shows that, in general, celebrity endorsements of an event or product is a positive return on investment," said Kristin Lamoureux, the director of The George Washington University's International Institute of Tourism Studies. "And with tourism destinations as well, celebrity endorsements are generally seen as a good thing," she said.

That being said, there are some risks associated with celebrities.

"The uncertainty of celebrities -- think about the Tiger Woods situation," Lamoureux said. "Would people hold the cause responsible for a mistake a spokesperson made?"

Perhaps more pervasive is skepticism of a celebrity's motives. "When you involve celebrities you have to be careful it is not seen as an activity to make the celebrity look good," Lamoureux said.

Perceptions are certainly in play, Clemmons said. "This does have some communications and public image value."

But while the initial reason for some humanitarian trips might be image-based, a celebrity is likely to leave with a stronger passion for the cause, he said.

Just like average people feel transformed after an inspiring volunteer experience, so can celebrities. "They have life-changing experiences, too," Clemmons said.