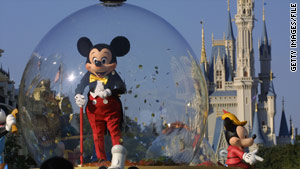 Disney ticket prices for parks in California and Florida are set to go up on Thursday.
STORY HIGHLIGHTS
RELATED TOPICS

(CNN) -- It's going to cost vacationers more to visit with Mickey Mouse starting Thursday, when Disney parks in California and Florida will raise ticket prices.

Disney posted an announcement about the price hikes Tuesday on its Disney Parks blog.

One-day, one-park tickets to Southern California's Disneyland Resort will rise from $72 to $76 for ages 10 and up and from $62 to $68 for ages 3 to 9. Prices for one-day park-hopper tickets will go up by $4 for both age groups.

Increases will also apply to multi-day passes at both parks.

Prices for tickets and passes already purchased will not be affected.