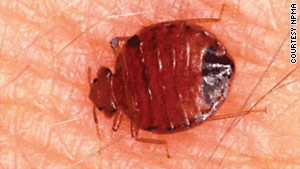 Hotel guest "Megs" posted this bedbug complaint about a room in Philadelphia, Pennsylvania, on Monday on bedbugregistry.com, a website that logs alleged encounters with the blood-feeding insects.

This agitated traveler is far from alone. According to a study released Monday, 67 percent of nearly 1,000 pest management companies surveyed have treated bedbug infestations in hotels or motels.

Overall, bedbug calls have increased by 81 percent since 2000, according to the National Pest Management Association, which conducted the 2010 Comprehensive Global Bed Bug Study with the University of Kentucky.

Infestations tend to occur more frequently in urban and suburban areas with larger populations, according to the study, but the tiny pests aren't particular about their accommodations. Bedbugs may take up residence anywhere from houses and laundry facilities to budget hotels and four- and five-star resorts.

Though the insects aren't known to transmit disease to humans, bites may itch and cause an allergic reaction in some people.

Researchers identify increased travel as a key reason for the spike in infestations. "Bedbugs are often referred to as the 'hitchhiking pests,' " said Missy Henriksen, a spokeswoman for the National Pest Management Association.

"They need to be where people are, so they're on the move with people, and obviously as more and more people have increased their travel habits, bedbugs have certainly been able to tour the world," Henriksen said.

Not a sanitation problem

While travelers may be horrified to find bedbugs in a hotel room, cleanliness isn't a factor in the pests' arrival.

"It's not a hygiene issue, and that's a very important thing for all consumers to understand," Henriksen said. The American Hotel and Lodging Association echoes that message.

"Education, awareness and vigilance are critical. A trained and knowledgeable housekeeping staff is one of the best lines of defense, along with having regular pest control inspections," the association said.

The lodging association conducted symposiums last summer to address preventive and corrective measures for dealing with bedbugs, and the Environmental Protection Agency held a National Bedbug Summit last year in response to the pests' resurgence.

On its website, the lodging association advises daily inspection of linens, mattress and box-spring seams, headboards and bedding by hotel staff. Staff should look for live insects as well as signs of the pests, including spots of dried blood or excrement.

What's a traveler to do?

Travelers should also conduct a brief room inspection upon arrival, looking at the linens, the mattress, the headboard, upholstered furniture and drawers where clothes will be stored. Henriksen advises guests to store luggage in the bathroom during the room check, where hard surfaces make bedbug infestation less likely.

"Once they return home, it's always good practice to do an inspection of your suitcase and the garments within it," Henriksen said.

Even unworn clothes should be thoroughly washed in hot water and suitcases with signs of bugs should be vacuumed with a vacuum cleaner hose, she said.

Getting rid of the pests can be costly. Depending on the level of infestation, treating for bedbugs can cost a homeowner several hundred to several thousand dollars, Henriksen said.

Most of the pest control experts surveyed, about 90 percent, reported treating for bedbugs in apartments, condos and single-family homes, and 4 to 5 percent reported treating infestations in laundry facilities and movie theaters.

Bedbugs were identified as the most difficult pest to treat by 76 percent of the nearly 1,000 U.S. and international pest control companies surveyed.

Each female can produce up to 400 offspring, so infestations can spread quickly, Henriksen said. Bedbugs can live for up to a year without eating, and they're very small, about the size of an apple seed.

With so many people traveling over the summer, it's important to get the message about bedbugs out, Henriksen said. "Not from a paranoia standpoint, but just proper vigilance."

Have you encountered bedbugs? Share your experiences in the comments section below.