'Everything was flying' during turbulence 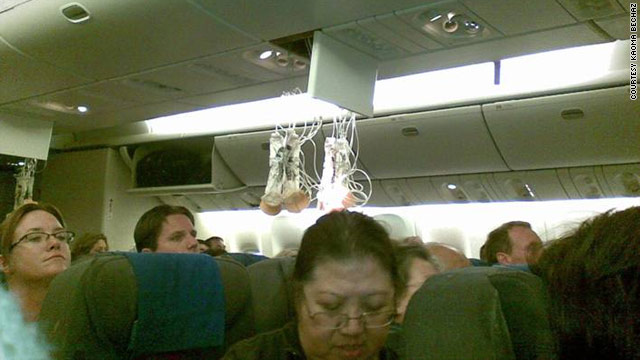 A passenger on the United flight that hit severe turbulence Tuesday night took this photo of the cabin interior after the incident.
STORY HIGHLIGHTS

(CNN) -- A shaky coffee cup is as bumpy as flying gets for most travelers, but in-flight turbulence can sometimes turn into the most violent roller coaster ride anyone can imagine -- transforming a flight from routine to frightening in an instant.

Unbuckled passengers can hit their heads on the ceiling, bags can go flying through the air and flight attendants can be knocked off their feet.

Take the latest incident, which left 21 people hurt on Tuesday night after a United Airlines Boeing 777 on its way from Washington Dulles International Airport to Los Angeles, California, hit severe turbulence and was diverted to Denver, Colorado.

Most of the people hurt had moderate head, neck and back injuries, according to the chief paramedic on the scene.

Once on the ground, dazed passengers tried to come to terms with what they felt and saw on board.

"It came out of nowhere. There was really no turbulence but all of a sudden a huge jolt," said Madeleine Anaya, according to CNN affiliate KMGH.

"Everything was flying -- people who were not buckled up were injured." 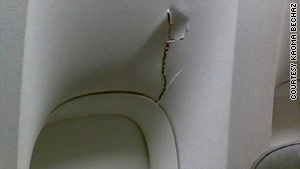 A passenger on the United flight was thrown so violently into the side of the cabin that it caused a crack.

The turbulence left the cabin in chaos, said another passenger.

"It was pretty bad. Laptops were everywhere. It looked like there was a huge party on the plane but there wasn't," Michael Batts told KMGH.

She was buckled in, but the passenger sitting next to her was knocked so hard into the side of the cabin that she left a crack above the window.

In-flight turbulence is normal and happens often, according to the Federal Aviation Administration. Because it can throw passengers from their seats without a warning, many airlines and safety experts advise travelers to keep their seat belt fastened even when the seat belt sign is turned off.

Turbulence is also the leading cause of injuries to airline passengers and flight attendants in nonfatal plane accidents, the FAA says on its website. Almost 60 people are hurt each year in the United States by turbulence while not wearing their seat belts.

"I've been on a couple of flights where the turbulence was so violent that we could not read the instruments in the cockpit," said John Wiley, an airline safety expert who was an airline pilot for 27 years.

"You get off the airplane and you've got a couple of bruise marks on your shoulders from the shoulder harnesses that you're wearing."

While pilots know all too well the havoc turbulence can cause, they often have little or no warning that it's coming.

On-board weather radar can help the crew detect and avoid storm-related turbulence, said Daniel Fahl, a pilot for a major U.S. airline. But there are no instruments to detect clear-air turbulence.

"When we're talking about clear-air turbulence where the naked eye cannot detect it -- well, neither can the airplane," Fahl said. He compared his worst encounter with turbulence to hitting "a brick wall."

"It was a pretty big jolt and went on for about 20 to 30 seconds to the point where the auto pilot that flies the airplane just gave up and said, 'OK, you fly it because I can't.' "

Hard-to-detect rough air can include mountain wave turbulence, which is caused by the specific way air flows and behaves around mountains. A sudden change in the direction or intensity of the wind can also create a bumpy ride, Fahl said. Entering or leaving the jet stream can be turbulent, for example.

Often, a pilot's best indicator of possible turbulence is the experience of a plane flying ahead of him or her on the same route, Fahl added. Air traffic control will alert pilots to any trouble reported by others on their flight path.

Both Wiley and Fahl compared flying in turbulence to driving on a bumpy road.

"I wouldn't set foot on an airplane every day if I didn't think it was the safest part of my day," Fahl said.

Have you had any bad experiences with in-flight turbulence? Let us know in the comments section below.