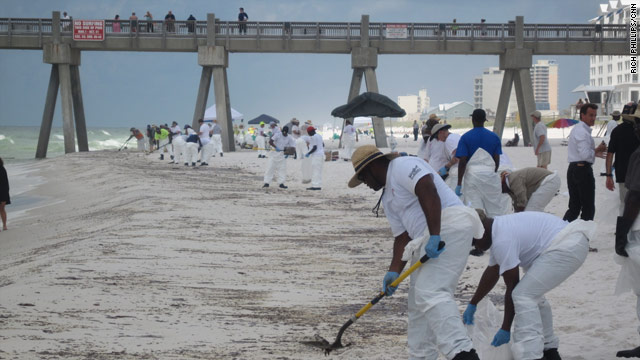 (CNN) -- The oil spill on the Gulf Coast has states and visitors bureaus working hard to keep the public updated and reassure beach-bound travelers.

Oil has affected sections of Pensacola Beach and Perdido Key beaches, according to the Pensacola Bay Area Convention and Visitors Bureau. Photos from the area showed patches of dark, syrup-like oil on the white sand.

Pensacola Beach is open, but the waters from the Park West recreation area to the area just west of Portofino are closed to all swimming and wading until further notice because of large quantities of emulsified oil in shore waters and along the shoreline, the bureau said.

"The shoreline and water along Santa Rosa Sound on the north side of the island is still clean, clear and open for swimming," according to the bureau's website.

The beaches in Fort Walton Beach, Destin and Okaloosa Island are open to the public, and the air quality is good, according to the Emerald Coast Convention and Visitors Bureau, which represents the three destinations.

"Depending on the wind direction, tar balls may float ashore in Destin or Ft. Walton Beach later in the week, but cleaning crews are standing by," the bureau's website said.

Pebble-sized tar balls have been washing ashore on some beaches of south Walton County. The local health department has also issued a health advisory for the area stretching from the Miramar Beach Access eastward to the end of Topsail Hill State Preserve. All beaches remain open, according to the Walton County Tourist Development Council's website.

Meanwhile, small scattered tar balls and oil patches have affected Panama City Beach, but the beaches are open and the swimming is still safe, the area's visitors bureau website said.

"Our sugary white sand beaches are open for the enjoyment of our guests and, as of now, we are seeing only intermittent impact," according to the bureau.

Dime-size to 5-inch tar balls continue to wash up in widely scattered areas of northwest Florida, but all of the state's beaches remain open, according to Visit Florida, the state's tourism corporation.

All of the Gulf Islands National Seashore sites, which are in Florida and Mississippi, are open, the National Park Service's website said.

But several spots have been affected by the oil spill.

A health advisory is in effect from Walkover 23 on Pensacola Beach, Florida, to the west tip of Santa Rosa Island including Fort Pickens. This advisory extends to the Perdido Key area, including Johnson Beach.

"Because of significant quantities of oil in the water and coming ashore signage and flags advise visitors to not wade or swim in the water," according to the park.

Gulf Shores and Orange Beach have experienced significant oiling, according to the Alabama Gulf Coast Convention and Visitors Bureau.

"The beaches are open and visitors are still welcome to sunbathe and walk the beach, but we strongly suggest they swim in a pool or enjoy our many off-beach activities," the site said.

The Alabama Department of Public Health has issued an advisory against swimming in waters off Gulf Shores, Orange Beach and Fort Morgan, and in bay waters close to Fort Morgan, Bayou St. John, Terry Cove, Cotton Bayou and Old River.

The oil's biggest impact in Louisiana is on the portion of the coast from the mouth of the Mississippi River extending east, according to a state emergency website.

"Most of the Louisiana Gulf Coast, 70 percent, is unaffected by the oil spill and remains open for commercial and recreational fishing," according to the Cajun Coast Visitors and Convention Bureau website.