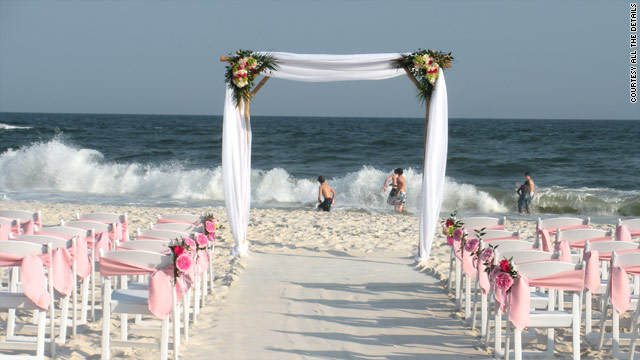 (CNN) -- "Planning a wedding once is fun," said bride-to-be Meggie Fleming. Planning it twice? "Not so much."

Fleming, 23, canceled her August 28 wedding on the beach in Gulf Shores, Alabama, this week and is in the process of planning a new event on the same date closer to her home in Decatur, Alabama.

She and her fiance, Tyler Thacker, have been in wait-and-see mode since April, hoping the oil spill off the coast wouldn't affect their plans.

They're far from the only couple who has decided to cancel plans to tie the knot on the sandy beaches along the Gulf.

"They're canceling like crazy, especially in the last few days," said wedding planner Charli Linn of All the Details in Fairhope, Alabama. Linn was organizing Fleming's wedding and estimates between 30 and 50 percent of her clients have canceled already.

Linn's brides will get most of their money back, less the nonrefundable deposit.

"I had a lot of brides that paid me in full thousands of dollars, and I'm refunding everybody," Linn said. She said she doesn't feel right keeping their money, and she wants clients to keep visiting the area.

"We're trying to keep our towns alive, and the way we treat people today is going to determine if they come back," Linn said.

Down the coast in Fort Walton Beach, Florida, Maggie Halsey's business has also been socked by the oil spill.

"Last week I credited probably $10,000 in weddings, and that's kind of an ouch," said Halsey, owner of Barefoot Weddings.

Bookings have dropped off "tremendously," probably by about 60 percent, and Halsey has had 13 cancellations in the past two weeks. Her clients come from all over the United States with visions of picture-perfect waterfront weddings in Destin, Navarre Beach and Okaloosa Island.

Halsey is referring clients to BP to make claims for their nonrefundable deposits, which range fro $200 to $700. Halsey is preparing her own paperwork to submit to BP for the business she has lost as a result of the oil disaster.

All the Details' Linn was pleased with how her first claim to BP was handled. She submitted a claim for a loss of $6,500 for a wedding canceled about a month ago and within a few weeks, she had a check for $5,000.

She's still waiting for the balance and now has a stack of new claims to file, but she was surprised at how fast she received the money.

Still, the damage to her business is done. Linn isn't going to meet her goal of 50 weddings this year. "I'm not even going to meet half my goal," she said.

Orange Beach Weddings, in Orange Beach, Alabama, was having one of its best years since the business opened six years ago.

"It's turning into the worst year, but you can't blame girls who don't want to get married with oil on the beaches," said Sheryl Lindsay, who owns the business with her twin sister.

Lately she's been acting as a counselor to distressed brides and their families.

Lindsay usually gets one cancellation a day and "another phone call will be mom calling going, 'Please call my daughter. She's freaking out' because they watched something on the news or their guests are telling them, 'We don't want to go, why don't you cancel?' "

The business is filing claims with BP and brides will get their money back if the claims are paid.

"I don't have it in the meantime," Lindsay said. The phone stopped ringing at the end of April, so the $700 deposits from the usual eight to 10 bookings per month have stopped coming in.

"I just wish BP would get it cut off so that we could see an end to it," Lindsay said.

Despite the disruption, the weddings march on. Fleming and her fiance located a new venue on Wednesday, and they're working on lining up flowers, chairs and someone to marry them.

"I was disappointed at first because it's something I've been worrying about for a month as the time has gotten closer, but things happen, and we just have to make the best of the situation."