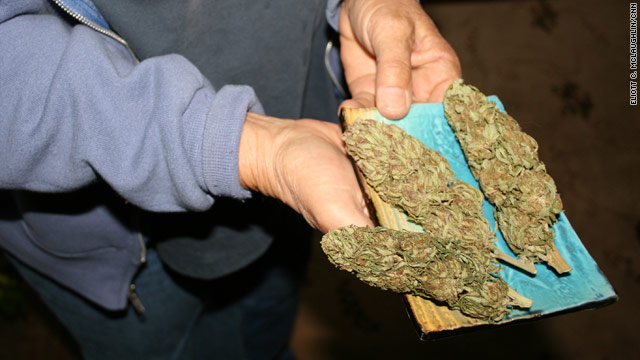 Humboldt County growers, such as this one who requested anonymity, say legalization could hurt Northern California towns.
STORY HIGHLIGHTS

Eureka, California (CNN) -- Tony Smithers has been answering a lot of questions lately about marijuana. Over coffee at Ramone's Bakery & Cafe, he was polite but mildly irked to be fielding queries about a substance the federal government outlaws.

Smithers, the Humboldt County Convention and Visitors Bureau's executive director, would rather talk about the county's other natural resources: its forests, its rolling mountains, its 110 miles of coastline.

But with legalization on a statewide November ballot and with Humboldt situated in the Emerald Triangle, so named for its massive marijuana output, there have been distractions of late.

"You see my card and my badge? They have a redwood, not a marijuana leaf," Smithers said with a chuckle as he sat down.

Figures for the region's marijuana economy are hazy, but drive through towns in Humboldt or Mendocino counties and it's easy to see marijuana's importance to regional commerce. Head and hemp shops sit alongside cafes and eateries, and niche businesses -- like glassblowers who specialize in smoking apparatuses -- are more common here than in cities 10 or 20 times the size.

Though Smithers touts Humboldt's timber, dairy and grass-fed beef, he readily admits that marijuana is his county's No. 1 export.

"Oh hell yeah, by a long shot," said Smithers, who has lived in Humboldt for 15 years. "It's the elephant in the room up here." 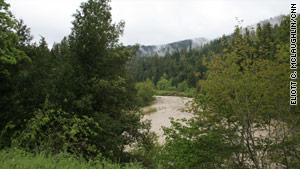 A Humboldt County tourism executive says mountains and rivers -- not marijuana -- are his marketing focus.

People smoke weed relatively freely on the streets of Arcata, Redway, Garberville and Ukiah, and bartenders in Eureka said they see plenty of "pot tourists" drawn to the region's high-grade marijuana. Some travel from as far away as Massachusetts and New Jersey, one bartender said.

The questions asked of Smithers lately revolve around such travelers and whether Humboldt should reach out to stoners if voters pass an initiative that would legalize marijuana for adult recreational use.

"My approach is to have that marketing plan in the bottom drawer of my desk and not show it to anybody until we see what's going to happen and which way the wind is blowing," Smithers said.

Recent polls say 56 percent of Californians favor taxing and regulating the plant. The national approval rate is much lower -- as low as a third, by some estimates.

No matter what voters decide, a federal ban will persist. Gil Kerlikowske, President Obama's drug czar, said marijuana legalization is out of the question, "a nonstarter." He said he would not speculate on the government's response should California legalize recreational use.

"Essentially, we know that with legal alcohol and legal tobacco, history shows that if it's legally available, use will increase," he said. "If you have a greater number of users, you have an increase in social, health care and criminal costs."

Though marijuana's future in California is murky, Smithers made some observations on how Emerald Triangle growers could market their wares.

• Allows people 21 and older&nbsp;to possess up to an ounce of marijuana for personal use.
• Allows for the cultivation, in plots no larger than 25 square feet, and transportation of marijuana for personal use.
• Enables local governments to tax the estimated $15 billion in marijuana transactions each year.
• Allows local governments to maintain prohibitions on marijuana, much like a dry county would alcohol.
• Permits the Legislature to develop a statewide regulatory system for commercial cannabis.
• Bans public consumption, possession on school grounds, smoking in front of minors and providing marijuana to those younger than 21.
• Maintains prohibitions against driving under the influence of drugs.

He's heard proposals that the region should become the "Napa Valley of Marijuana," complete with tours and tasting rooms. Such notions presume a lot of infrastructure and entrepreneurship, he said.

Hamilton knows plenty of growers and said she has her own legal medical marijuana plot at her northern Mendocino County home. She worries that with marijuana's stigma and federal laws prohibiting it, corporations will be reluctant to pump money into infrastructure serving the marijuana economy.

She doesn't think the necessary money can be generated locally, either, she said.

Northern California has already seen "a devastating effect from the medical marijuana flood" after the state passed Proposition 215 in 1996, Hamilton said. Prices for primo pot dropped precipitously, and growers in the Emerald Triangle fear a pound that once sold for as much as $6,000 in the '80s will be worth less than $2,000 if California voters OK adult recreational use.

"We're going to be a ghost town here," Hamilton said between bites of cheeseburger at a Redway restaurant.

There are potential pitfalls to modeling your industry after the state's thriving wine industry, said Terry Hall, spokesman for the Napa Valley Vintners Association.

Despite the prominence of the region's name, Hall said, Napa produces only 4 percent of California's wine. Without a doubt, the 30-mile-long river valley is prime grape-growing turf. With its abundant soil variations and elevations spanning 4,000 feet, farmers can grow grapes ranging from Riesling to cabernet.

The vintners association lobbies and litigates to protect Napa, which is part of a federally designated American Viticultural Area, Hall said.

But predating the association's vigilance was an agreement among Napa wineries that they would promote the region before their own brands. This grape game theory is how a relatively small wine region ended up with such an iconic name, Hall said.

At the very least, Northern California's pot growers should seek similar pacts to protect and promote potential brands like Humboldt, Mendocino or Emerald Triangle, he said.

"They need to have some sort of camaraderie in terms of what your mission is, come out of hiding, be proud of your product," he said. "It will be a huge marketing endeavor to come out from under cover. They will be smart, I think, if they form these alliances earlier."

"I would capture that hippie mystique. This is a tie-dye market."
--Tony Smithers, executive director of the Humboldt County Convention and Visitors Bureau
RELATED TOPICS

Hall has his doubts that Napa's model would work for marijuana and asks: Are distillery tours big business in rum-producing countries? Does North Carolina have tobacco tastings?

"It'll be interesting to see how they market to the masses," Hall said.

Smithers said the convention and visitors bureau would never disenchant visitors coming to the region for its hiking, rafting, fishing or bird watching, but he concedes that a day may come when the bureau has to address cannabis commerce.

Right now, however, his focus is on establishing a National Heritage Area that would emphasize the region's natural resources and its "history of conservation and environmentalism," he said.

Marijuana growers might be smart to capture a similar vibe, he said. After Northern California's fishing and logging industries began to falter, "urban refugees" flocked to the region in the 1960s.

"They need to recapture the sense of freedom and possibility that the '60s were all about," Smithers said. "I would capture that hippie mystique. This is a tie-dye market."

Pressed a fourth and final time over coffee, Smithers again graciously dodged specific questions about how he might market marijuana. However, he realizes that people are watching California. He sees an opportunity, regardless of the referendum's fate.

"The country and world will be looking at us over this, so I need to parlay that into: Come look at the redwoods!" he said. "If you think our pot will get you high, come look at the trees!"