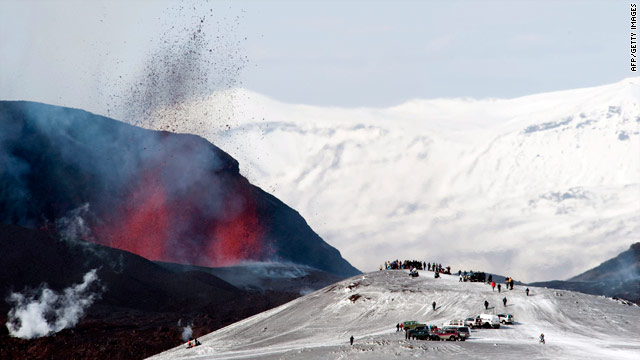 Tourists gather to watch lava spurt out of the site of a volcanic eruption at the Fimmvorduhals volcano near the Eyjafjallajokull glacier on March 27.
STORY HIGHLIGHTS
RELATED TOPICS

(CNN) -- A long-dormant volcano in Iceland that began erupting last month has sparked a tourism trend as curious onlookers are paying to get a closer look.

Despite the Eyjafjallajokull volcano's remote location, beneath a glacier to be exact, the area surrounding it has been teeming with tourists in search of spectacular views of its lava flows and volcanic plumes.

Various vendors have surfaced, offering tours of the area by helicopter or jeep.

For less than $400 a person, tours depart from the capital, Reykjavik, toward the southern part of Iceland. Part of the roughly 100-mile trip includes a drive on the Myrdalsjokull glacier. Finally, at nearly 4,000 feet (1,200 meters) above sea level, the fire from the volcano comes into view.

"It's amazing to see the volcano because of the season," says Vidir Reynisson, Iceland's Civil Protection Services Department Manager. "There's a lot of snow, and it's quite spectacular to see the contrast" with the burning lava.

A few isolated spots are open for sightseeing, but a one-kilometer radius encircling the immediate area is restricted to tourists and some areas of the glacier are off-limits.

Reynisson says there's no immediate threat to onlookers, and nearby residents who were evacuated last month because of flooding concerns have returned to their homes.

"The situation is good," he said. "We have rescue teams, police and lots of tourists traveling to the areas."

Reynisson said the only problems security crews have encountered are hikers who are not properly equipped trying to make their way toward the area on their own.

The volcano, which last erupted in 1821, continues to be active since it came back to life March 20. Two additional fissures erupted Thursday, directing new lava flow toward the northeast.

Glaciers in the area are not affected, but authorities are on alert if changes develop, according to the country's Civil Protection Services.

And for those who can't make the tour, a live still photo of the volcano is updated every eight seconds on www.vodafone.is/eldgos.