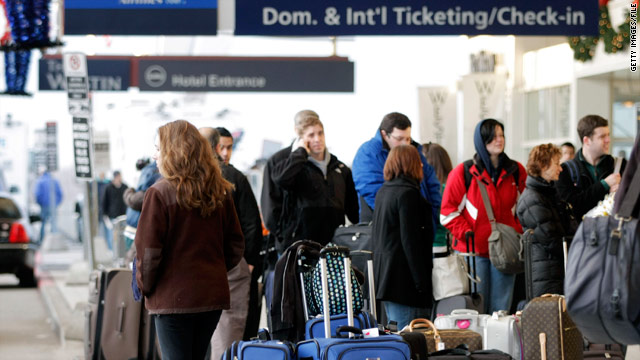 Passengers arrive to check in at Detroit Metropolitan Airport, which topped the satisfaction study.
STORY HIGHLIGHTS

(CNN) -- Many air travelers know: Getting through the airport can make flying look easy.

Whether it's hunting for a parking space, waiting in line to check bags, making it through security, finding your gate and scrounging for a decent meal -- the mad scramble to finally buckle in can be as exhausting as spending your flight confined to a tiny seat.

A new report shows which North American airports seem to make the experience painless and which can add to the frustration.

The study, conducted by J.D. Power and Associates, surveyed more than 12,000 people who took a round-trip flight between January and December 2009.

They were asked to grade their departing and arriving airports on categories like accessibility, the check-in experience, the security process, the level of comfort in the terminal, the food choices offered and baggage claim.

Detroit Metropolitan Airport in Michigan received the best grades among large airports -- those servicing 30 million or more passengers per year -- while some of the country's best known airports came in at the bottom.

Detroit Metro officials were "pleased and honored" by their top ranking, said Wayne County Airport Authority CEO Lester Robinson. The results may be especially surprising given that the airport tied for 12th place in the prior study, done two years ago.

Air travelers seem to like the airport's "two clean, pleasant and efficient new terminals with fun shops and restaurants," Robinson said in a statement. The airport's North Terminal opened in fall 2008; its McNamara Terminal has been operating since 2002.

"Much of the credit goes to our airline partners, who have committed themselves to improve on-time performance and luggage handling," Robinson said.

Detroit Metro performed particularly well in the terminal facilities and baggage claim categories, according to J.D. Power and Associates.

iReport: What do you think of the rankings?

So while travelers enjoy perks like wireless Internet access at an airport, they focus on good organization and comfort. Effective signage, something that might seem innocuous, was particularly important to travelers, Greif said.

"It's still about getting the passenger into and through the airport as easily and efficiently as possible," Greif said.

"Just as airports may be improving their operations over time, passengers as consumers -- their expectations constantly evolve and change. Today's breakthrough performance is tomorrow's baseline."

Newark International in New Jersey came in last in the survey.

A spokesman for The Port Authority of New York and New Jersey, which operates JFK International and Newark, pointed out the airports have fared well in previous surveys.

"We take our responsibilities to our customers seriously," said Ron Marsico, adding that about $15 billion has been spent over the past 15 years to improve flight operations and passengers' experiences.

People who report being "delighted" with their experience spend an average of 45 percent more in an airport than those who say they are "disappointed," J.D. Power and Associates found.