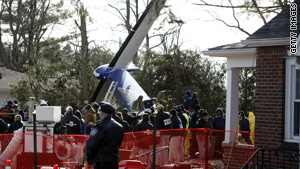 Washington (CNN) -- Confronted with signs that his plane was entering an aerodynamic stall, the pilot of Continental Flight 3407 pulled on the plane's control column when he should have pushed -- a simple but inexplicable error that led to the death of 50 people, the National Transportation Safety Board ruled Tuesday evening.

The board's ruling, coming a year after the crash near Buffalo, New York, is stark in its simplicity.

NTSB members say the accident laid bare a complex myriad of safety problems at the nation's regional airlines and some that extend to major carriers. Among the problems:

-- Airlines that do not adequately train pilots to handle stalls.

-- Pilots who engage in unnecessary conversations during takeoffs and landings.

Video: Are we safe when we fly?

The safety board issued more than 20 recommendations at the conclusion of the hearing.

"The tragedy in this report is that what we uncovered in this investigation, we already knew," NTSB Chairman Deborah Hersman said.

"If there's one thing that we take away from this action, it's that history repeats itself," she said.

The accident plane, a Bombardier Dash 8-Q400, was owned by Colgan Air Inc., but it was doing business as a Continental Connection flight when it crashed February 12, 2009, in Clarence Center, New York, about five miles short of its destination, Buffalo-Niagara International Airport.

The safety board said neither the pilot, Capt. Marvin Renslow, nor the first officer, Rebecca Shaw, recognized that the plane was slowing down too quickly, nor did they react properly when the "stick shaker" -- a vibrating column that indicates the plane is entering a stall -- activated.

The crew did not perform in a way consistent with the training they received.
--Dr. Evan Byrne, NTSB investigator
RELATED TOPICS

Renslow, the safety board said, reacted in a way "consistent with startle and confusion." He pulled on the column, exacerbating the situation and dooming the aircraft, the board said.

Likewise, Shaw did not "call out" the stall, nor did she push forcefully on the control column as she was trained.

Board members said the flight crew did not live up to the professional standards necessary for safe flight.

"It is apparent to me the captain kept a very casual and relaxed tone on the flight," said board member Robert Sumwalt, who flew as an airline pilot for about 24 years.

Sumwalt said he was struck by the amount of conversation between the captain and first officer, saying was "almost continuous."

"It was if the flight was just a means for the captain to conduct a conversation with this young first officer."

By continuously conversing, the crew "squandered time and their attention" -- resources that should have been spent gaining awareness of their surroundings and preventing errors, Sumwalt said.

First officer Shaw, meanwhile, sent out a text message on her cell phone five and a half minutes before takeoff, a violation of Federal Aviation Administration and airline policy, the board said.

"The crew did not perform in a way consistent with the training they received," said Dr. Evan Byrne, a board investigator.

While much of the focus remained on the actions of the pilot and first officer in the minutes immediately before the crash, investigators also explored a wide range of factors that may have contributed to the crash, including the crew's training, whether they engaged in extraneous discussions during critical phases of the flight, and their sleeping and commuting patterns.

The board agreed the pilot and co-pilot were fatigued, but disagreed about whether the fatigue contributed to the accident, eventually voting 2-1 not to include it as a contributor. But the board did recommend that the FAA and airlines take steps to address fatigue, including providing appropriate rest facilities for pilots.

Investigators ruled out mechanical problems, saying they found no evidence of pre-accident airframe, engine or system problems. And while the plane was in icing conditions, ice was not a factor in the crash, they said.

More than 60 family members attended Tuesday's NTSB meeting, many of them wearing photographs of their loved ones.

Jennifer West, whose husband, Ernie, died in the crash, said knowing the cause of the crash is more difficult than not knowing.

NTSB head Hersman criticized the FAA, saying many of the problems in the Colgan Air crash involved issues identified in previous crashed.

"Today is Groundhog Day and I feel here we are in that movie," she said, referring to the Bill Murray movie in which events are repeated endlessly.

The FAA responded that it has "driven significant improvements" in the past year "in pilot professionalism, training, and background checks." It said it will soon publish proposed rules addressing pilot fatigue and further improve training.

Family member John Kausner, who wore a button with a picture of his daughter Elly, 24, said the accident revealed to the public that there are two standards for commercial aviation -- one for the major airlines and a lesser standard for regional airlines.

"We were trying to buy a ticket that was most affordable, and unfortunately, we bought her demise," Kausner said.

"We thought it was safe. We're finding out that it is getting less and less safe, specifically on the regional (airlines). There's not one level of safety. There's two levels of training, two levels of susceptibility and that's what we're trying to change."

Hersman said it was "disturbing to hear of the numerous times" the pilot failed proficiency tests.

After the accident, it was revealed that Renslow had failed three pilot tests, known as "check-rides," before joining the airline, but had disclosed only one on job applications. After that, he failed another two check-rides while at Colgan Air.

In August, Philip Trenary, president and CEO of Pinnacle Airlines, the parent company of Colgan Air, testified at a Senate hearing that while "a failure on a check-ride is not necessarily a reason for someone not to fly, it depends on what kind of failure it is."

"The failures that we were unable to see were the basic fundamental failures that you would not want to have," Trenary testified.

"Let me stress one thing, Captain Renslow was a fine man by all accounts," Trenary said. But he added, "Had we known what we know now, no, he would not have been in that seat."

In Colgan's submission to the NTSB, Colgan describes its hiring process as rigorous. But, Colgan said, Renslow "was not truthful on his employment application." Renslow did not disclose two of the three proficiency checks he failed, Colgan said.