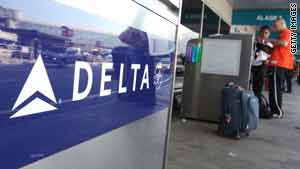 Delta and Continental passengers paying online for checked bags will be charged $23 for the first bag and $32 for the second.

The new Delta rates start Tuesday and apply to tickets purchased on or after January 5. Passengers who bought tickets before that date will pay the old rates, Delta spokeswoman Susan Elliott said.

Those checking in bags at the airport will shell out even more: $25 for the first bag, $35 for the second on both airlines.

Delta and Continental luggage fees now are among the highest in the industry. US Airways also charges $25 for the first checked bag and $35 for the second bag when checked in at the airport. Online, the airline charges $20 and $30 for the first and second bags.